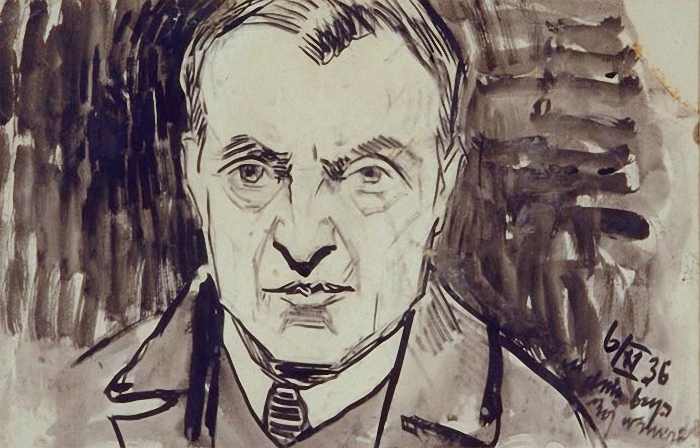 Elizabeth Rynecki will talk about Moshe Rynecki, her great-grandfather, in conversation with Barbara Kirshenblatt-Gimblett. They will explore the life and work of this talented painter of Jewish life in prewar Poland. Only a few of his paintings survived the war. We recall the tragic fate of this painter, who perished in the Holocaust, on the centenary of one of the first exhibitions of Jewish artists in Poland. What is the legacy of Rynecki’s work, what does it mean to Elizabeth, and why is it important for future generations?

Join the next “Meet the Family” conversation. Moshe Rynecki, a talented prewar painter who was raised in a Hasidic family, was moved into the Warsaw ghetto and is thought to have perished in Majdanek. Only a few of the 800 paintings that he hid were found after the war. His great-granddaughter Elizabeth has made it her mission to find his paintings, if not the original works, then documentation of them, in order to create a comprehensive catalogue of what he created. Elizabeth will explore the life and work of her great-grandfather and what his legacy means to her and to the world.

This conversation marks the centenary of one of the first exhibitions of Jewish artists in Poland (3 June 1921), which gave rise to other such exhibitions in which Moshe Rynecki took part.
See: A Centenary of the Exhibition of Works by Jewish Artists | Muzeum Historii Żydów Polskich POLIN w Warszawie

The “Meet the Family” series accompanies the new Legacy gallery at POLIN Museum. The 26 individuals featured in this gallery, when considered together, form a collective portrait of Polish Jews and their achievements. The “Meet the Family” series goes beyond the 26 luminaries featured in the gallery to other individuals and broadens the discussion to consider how their lives illuminate the history of Polish Jews, and how the history of Polish Jews illuminates their lives. The series will offer a unique opportunity to meet their descendants, some of whom are devoting their own lives to preserving the legacy of their distinguished forebears.

The conversation with Barbara Kirshenblatt-Gimblett explores the lives, work, and legacy of these exceptional individuals. How did those who achieved so much overcome limitations, pursue their goals, and take responsibility for themselves and others? May those we honor in these conversations inspire us today and in the future.

Barbara Kirshenblatt-Gimblett is Ronald S. Lauder Chief Curator of the Core Exhibition at POLIN Museum of the History of Polish Jews and University Professor Emerita at New York University. Her books include Destination Culture: Tourism, Museums, and Heritage; Image Before My Eyes: A Photographic History of Jewish Life in Poland, 1864–1939 (with Lucjan Dobroszycki); They Called Me Mayer July: Painted Memories of Jewish Life in Poland Before the Holocaust (with Mayer Kirshenblatt); The Art of Being Jewish in Modern Times (with Jonathan Karp); and Anne Frank Unbound: Media, Imagination, Memory (with Jeffrey Shandler), among others. She has received honorary doctorates from the Jewish Theological Seminary, University of Haifa, and Indiana University, was elected to the American Academy of Arts and Sciences and was decorated with the Officer’s Cross of the Order Merit of the Republic of Poland. She is the recipient of the 2020 Dan David Prize. She serves on Advisory Boards for the Council of American Jewish Museums, Jewish Museum Vienna, Jewish Museum Berlin, and the Jewish Museum and Tolerance Center in Moscow, and advises on museum and exhibition projects in Lithuania, Belarus, Albania, Israel, and the United States.

Elizabeth Rynecki is the great-granddaughter of Moshe Rynecki (1881–1943). She grew up with her great-grandfather's paintings prominently displayed on the walls of her family home and understood from an early age that his work connected her to the “Old Country." In 1999, Elizabeth created a website, “Moshe Rynecki: Portrait of a Life in Art,” which marked the beginning of an ambitious project to document the creativity of her great-grandfather. Elizabeth has a BA in Rhetoric from Bates College (1991) and an MA in Rhetoric and Communication from the University of California, Davis (1994). Her master's thesis focused on children of Holocaust survivors. Her book, “Chasing Portraits: A Great Granddaughter's Quest for Her Lost Art Legacy,” was published by Penguin Random House in September 2016. Her “Chasing Portraits” documentary film had its world premiere in 2018.

Moshe Rynecki (1881–1943) began drawing at an early age. According to family lore, he would use chalk, or sometimes paint when he had some, to draw figures on the floor and walls of his Hasidic home. He completed his Jewish education at a yeshiva, attended a Russian middle school, and attended the Warsaw Academy of Art (1906–1907). After completing his formal education, Rynecki went on to paint what he knew best: everyday Jewish life. He was active in the Warsaw Jewish art community and many of his works were shown in local galleries and included in Jewish newspapers, but he never became particularly famous. A copy of one of his paintings in the Rynecki family collection is featured in POLIN Museum’s Core Exhibition.

At the outbreak of the Second World War, Moshe divided his oeuvre of approximately 800 works into several bundles and hid them in and around Warsaw. He chose to move into the Warsaw ghetto in order to stay with his family and friends, and is thought to have perished at Majdanek. After the war, his widow found a single package of paintings in the cellar of a home in Warsaw’s Praga district. Of the find, his son George wrote, “The paintings seemed to have gone through the same fate as the Jewish people – massacred and destroyed. About 12–15 percent of Jews survived the Holocaust. So did my father’s paintings. One hundred and twenty were found out of a count of close to eight hundred works.”

Mira Schor will explore the life and work Ilya Schor, a renowned painter, jeweler, book illustrator and artist of Judaica, and forerunner of the "Jewish style" in American art.

On Sunday January 17, POLIN Museum launches a series of programs dedicated to Polish Jews who made outstanding contributions to the arts, sciences, economics, politics, and other fields in the 19th and 20th centuries.
Calendar