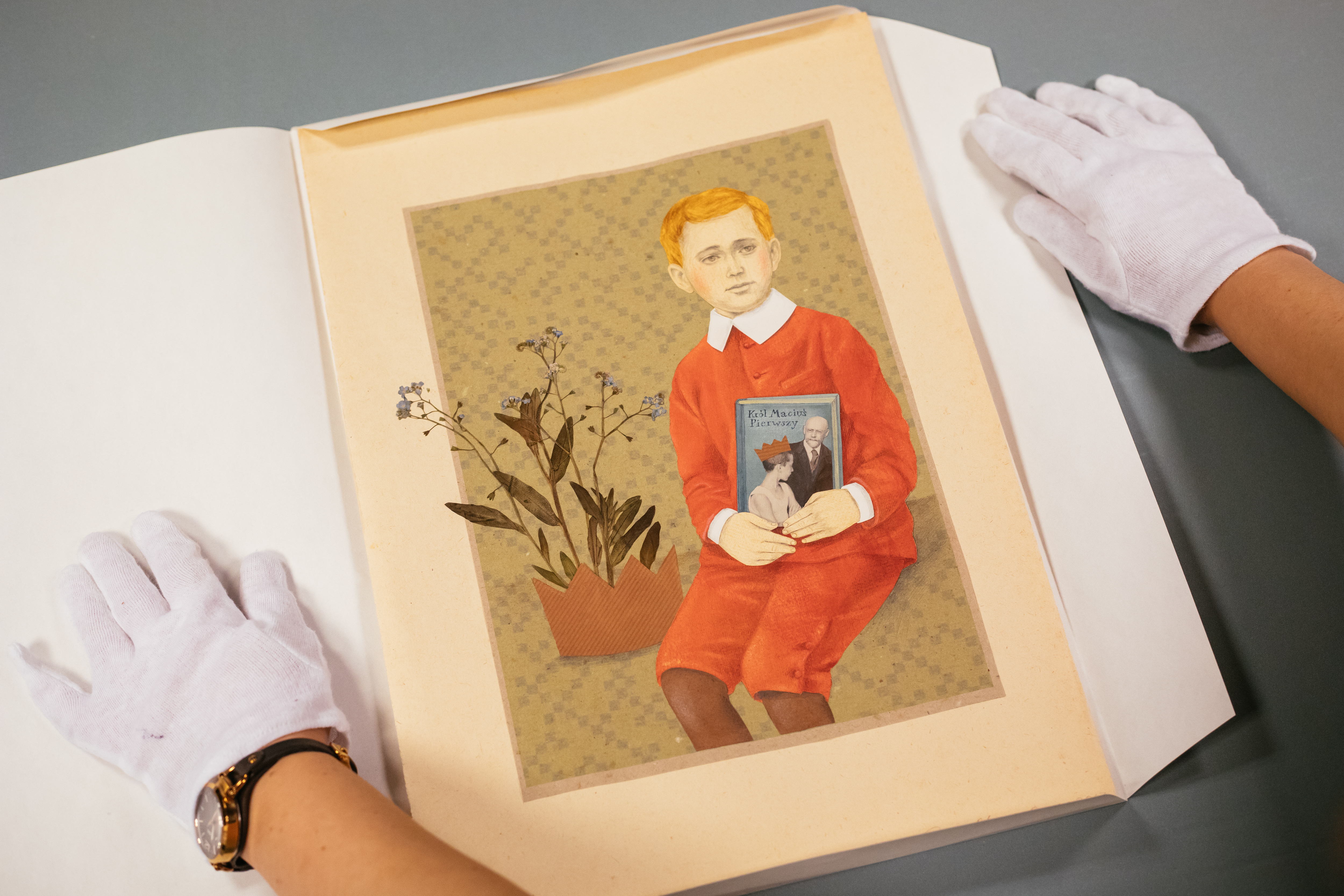 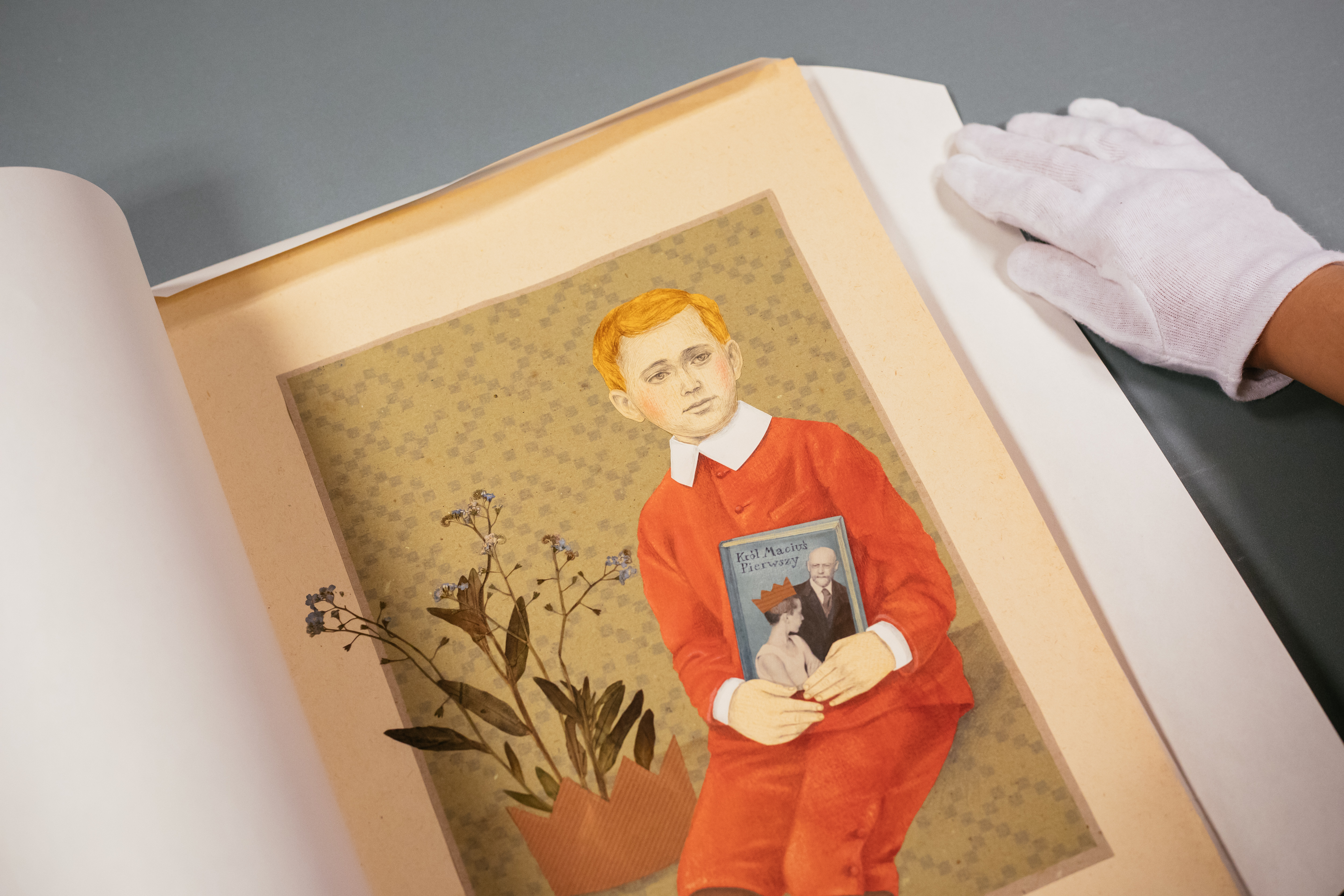 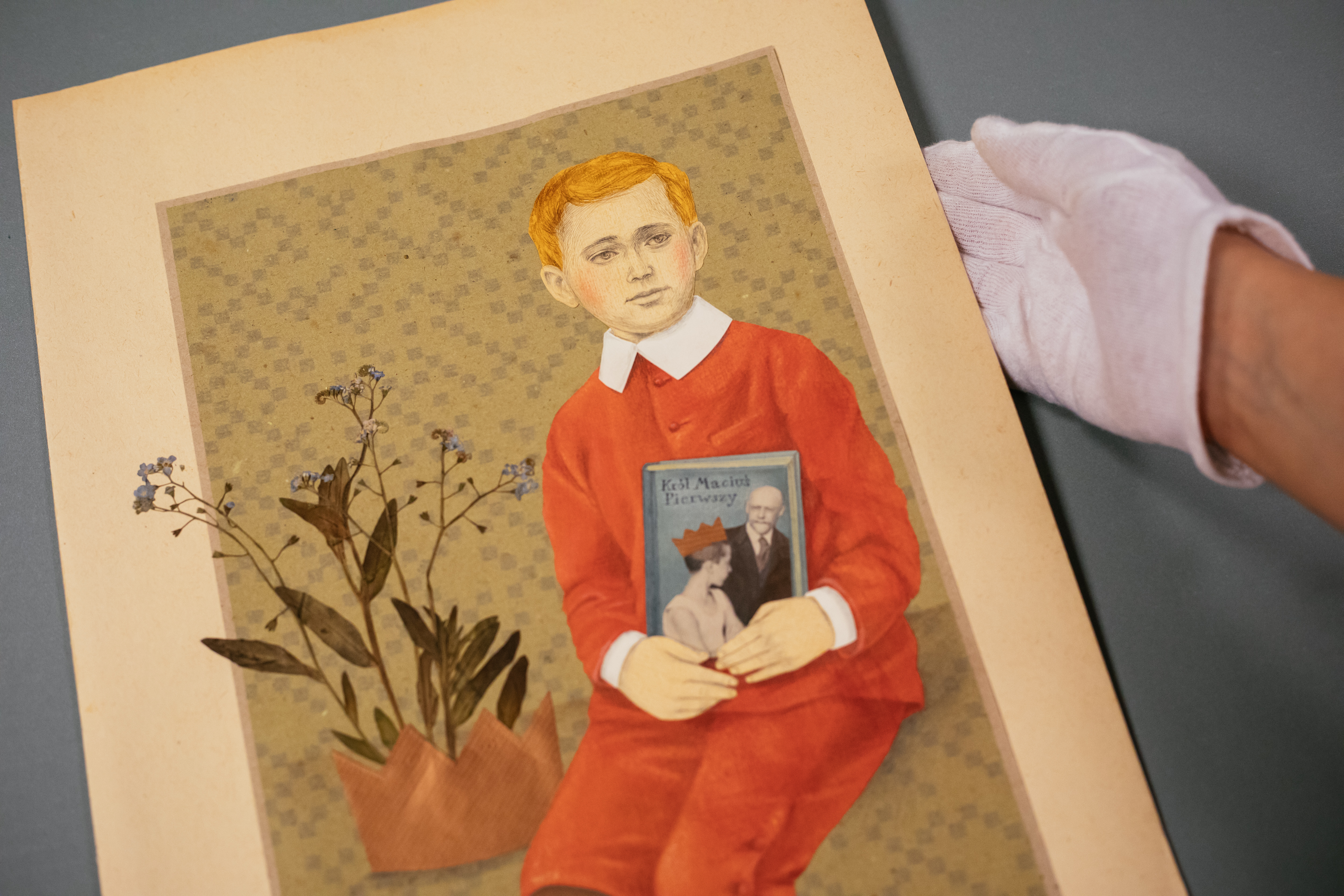 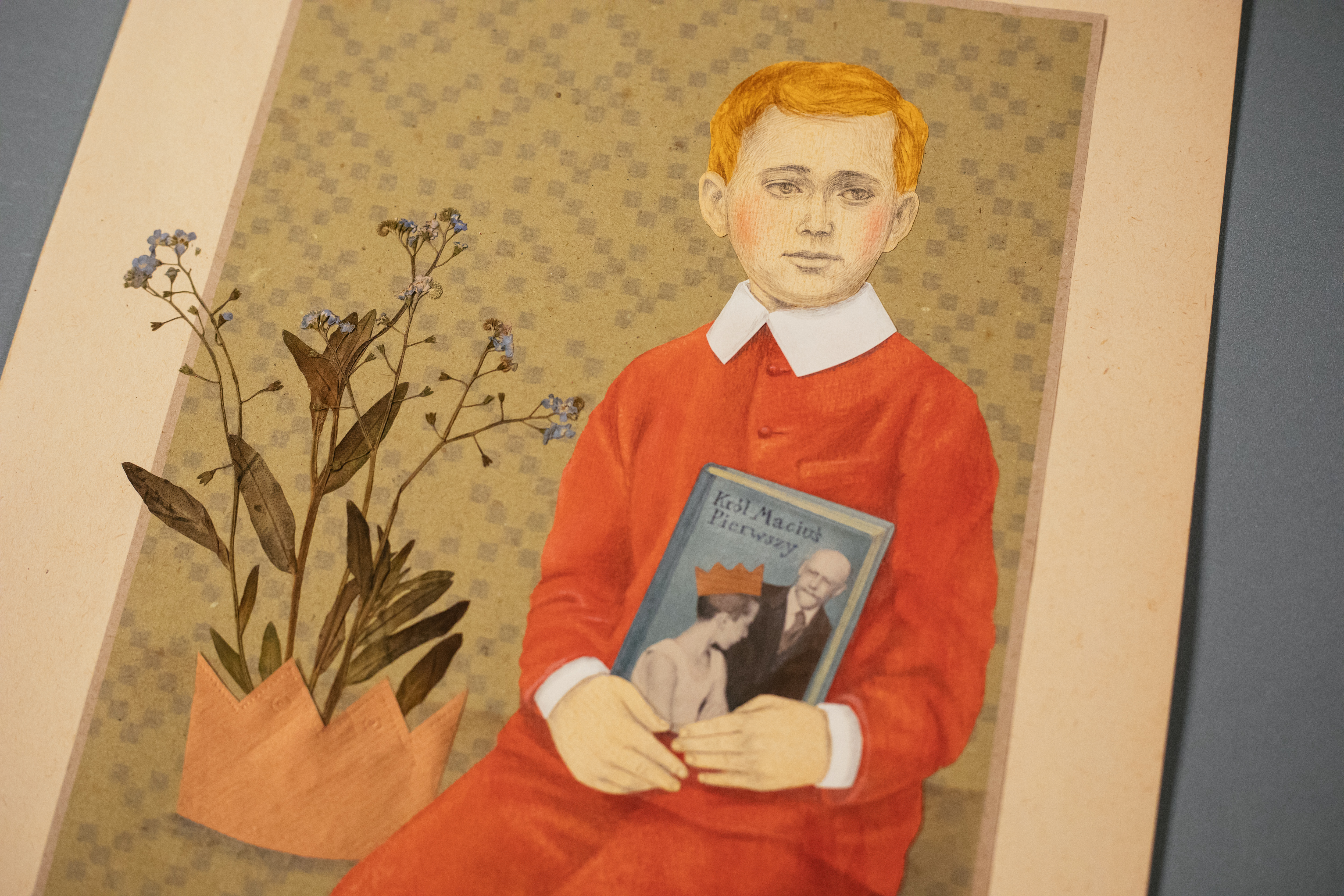 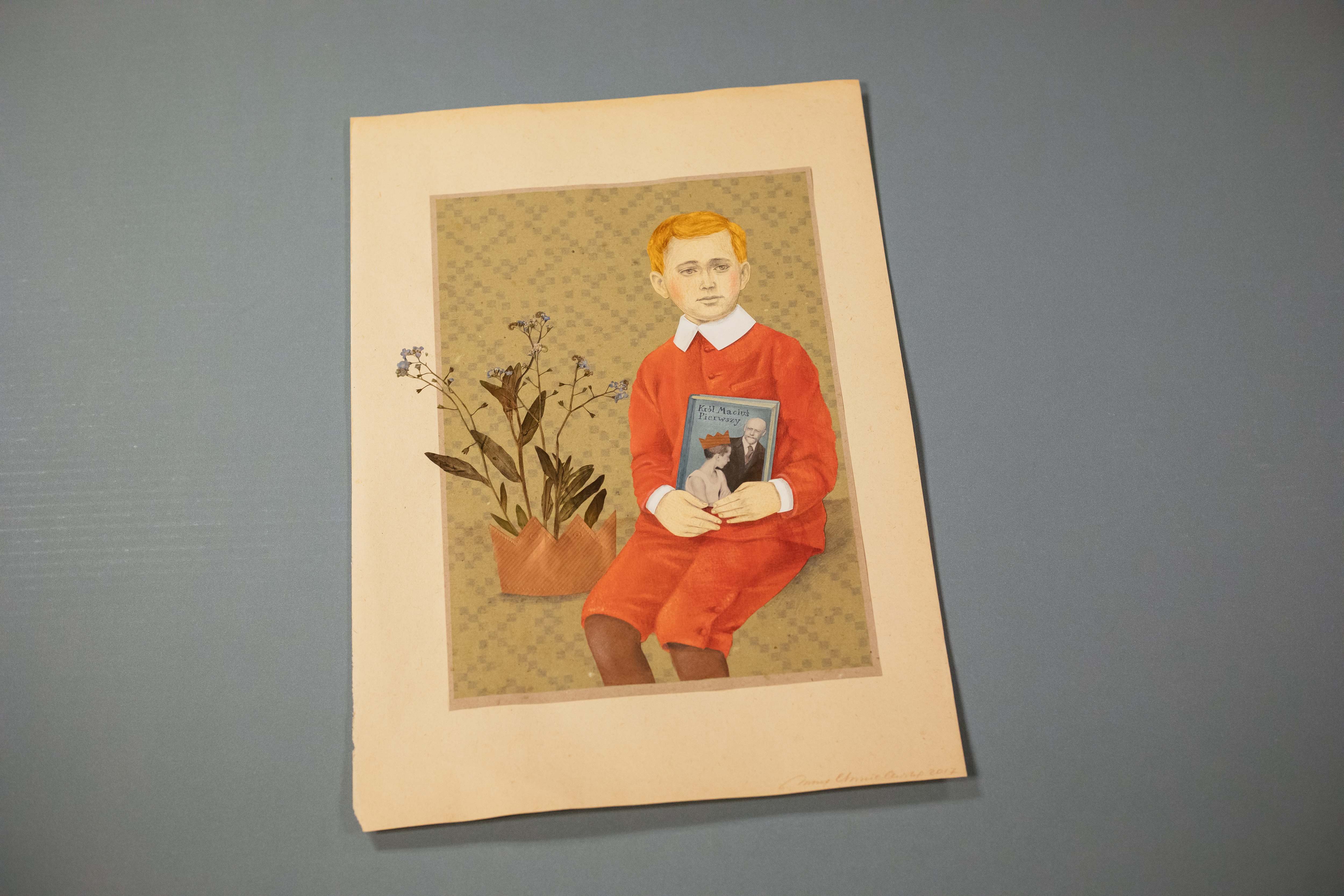 This original drawing of the hero of Janusz Korczak’s "King Matt the First" is one in a series of illustrations for this celebrated book. POLIN Museum commissioned Iwona Chmielewska to create these illustrations for the exhibition "In King Matt’s Poland: The 100th Anniversary of Regaining Independence" in 2018–2019.

Almost a century after this book first appeared, children the world over are still reading "King Matt the First," which has been translated into many languages, including English, Russian, German, Estonian, Lithuanian, Latvian, Ukrainian, Japanese, and Esperanto.

Janusz Korczak, the pen name of Henryk Goldszmit, was born in Warsaw in 1878 or 1879 and died in Treblinka in 1942. He was a medical doctor and progressive pedagogue who believed in the autonomy of the child. Together with Stefania Wilczyńska, he ran two orphanages, one for Jewish children and another for Christian children. He struggled to maintain the orphanage even while in the Warsaw ghetto. Although he had the opportunity to escape from the ghetto, he chose to remain with the children and perished with them in Treblinka.

Iwona Chmielewska, an award-winning Polish author and book illustrator, has exhibited her work in Bologna, Bratislava, Frankfurt, Copenhagen, Ljubljana, Munich, Rome, Seoul, Tokyo and Warsaw.  The object could be displayed in a showcase at the Resource Center.

Read about the exhibition here >>

The object was embraced by Aleksandra Auleytner with Klaudia and Karol Sadurscy.

We encourage you to look after other objects.

Association of the Jewish Historical Institute of Poland is a partner of the "Show your love" project and one of the co-founders of the POLIN Museum. The Association is a Polish non-profit organization.