History: from the Idea, through the Ohel, to the POLIN Museum

How did the idea of creating POLIN Museum emerge? Surely, by way of discussion and posing numerous questions: Why should such a museum be established in Poland and where exactly should it be located? Should it be yet another Holocaust museum or, instead, be a museum about life? The key role in the process was played by the Association of the Jewish Historical Institute in Poland. It was there that the idea of creating the Museum originated and where it was developed as a communal initiative until the year 2005.

The Association of the Jewish Historical Institute was established in 1947 as a result of the transformation of the Central Historical Commission, which had operated with the Central Committee of Polish Jews since 1945. Its library, archive and museum – focused on collecting preserved objects of Jewish art – were all located in a building which, prior to the Second World War, had housed the Institute of Judaic Studies and the Main Judaic Library. In the reality of post-WW2 Poland, it was for many decades the only institution engaged in collecting documentation and conducting research into the history of Jews on Polish territory.

The Holocaust Museum in Washington, opened in 1993, served as an inspiration for building the Museum of the History of Polish Jews. It was precisely in that year that the International Honorary Committee was formed whose aim was to promote the idea of the Museum.

The Committee was chaired by Chaim Herzog, former Prime Minister of the State of Israel, and Ronald S. Lauder, a businessman and philanthropist, Chairman of the Lauder Foundation. In the subsequent years, politicians and leaders of world Jewish organisations also served as the Committee members, among them Jan Nowak-Jeziorański, Jan Karski and Zbigniew Brzeziński.

More committees were set up - in New York in 1994, and in Germany and Poland in 1995. In 1996, the project team, namely the Committee for Planning the Museum of the History of Polish Jews, was established. Its aim was to develop the Museum’s programme and to manage the project’s implementation. On the wall, next to the text related to that, there is a copy of the resolution of the Board of the Jewish Historical Institute pertaining to the creation of the team and providing a list of people appointed to the Committee.

The year 1997 was one of the project’s milestones. On 17 April, the City of Warsaw granted the Association of the Jewish Historical Institute the plot of land, next to the Monument to the Ghetto Heroes, upon which the Museum would be constructed. In 1998, the Association of JHI and the Polish Committee for the Support of Building the Museum organised a concert, featuring New York based cantor, Joseph Malovany, at the Royal Castle in Warsaw. Polish President Aleksander Kwaśniewski, as well as numerous members of the Polish government, were among the guests at the concert, which was the first cultural event held to promote the project.

The year 1998 also marked the beginning of the programming work. Incomplete source or a lack of sources and historical artefacts were among the main problems faced. This resulted in the decision to create a narrative museum, i.e. a museum in which the point of departure would be a story rather than a collection. As well as the exhibition media themselves, the primary sources were to be selected in reference to the actual story to be told.

The subsequent stage of work was defined by the questions:

In 1999, the Museum Council was created, headed by Marian Turski, Chairman of the Board of the JHI Association. Professor Władysław Bartoszewski, then Minister of Foreign Affairs, became one of its members. It was at that time, also, that the Museum website and its first promotional materials appeared.

Alongside seeking of documentation and conducting of research, a search was launched for exhibition designers. This resulted in collaboration with London-based Event Communications. Work on the actual design commenced as late as 2001.

On 25 January 2005, long-term efforts of the Association of the Jewish Historical Institute of Poland finally bore fruit. On that day, on the initiative of then Mayor of Warsaw Lech Kaczyński, the Museum was formally established as a public-private partnership. The agreement, which brought to life the jointly financed cultural institution, was signed by Mayor Lech Kaczyński, Waldemar Dąbrowski, then Minister of Culture and National Heritage, and Professor Jerzy Tomaszewski, Deputy Chairman of the Association of JHI.

Soon after the agreement on establishing the Museum had been signed, an international architectural competition for the project of the Museum building was launched. The carefully formulated competition postulates included the information on the Museum mission as well as on the imperative to consider both the historical context of the future building’s location and the existing project of the core exhibition which was designed to be placed underground. The submitted entries were assessed by an international jury which comprised architects, representatives of the Association of JHI and of the Ministry of Culture.

Eleven projects were then shortlisted. The winner, Rainer Mahlamaki from Finland, was announced on 30 June 2006. The jury stated this in explaining its decision: “The octagonal building, designed on a square floor plan, opens up through a riveting, flexible space, onto both the Monument and the park. This dramatically, undulating space, clad in limestone and lit from above, was compared by its creators to the parting of the Red Sea - yam suf - which can be interpreted as the ritual of passing, or transcending, along the long path of Polish-Jewish history, through and a symbolic and generous opening, to a peaceful future.”

Jerzy Halbersztadt, the first director of POLIN Museum, played a vital role in the process of establishing the Museum in the years 2006-2011. Between 1999 and 2011, he headed the Association of the JHI’s works as a Project Director, and next as the Association’s coordinator for the Museum.

It was imperative for the Museum team to begin, as quickly as possible, to promote the Museum’s mission to the residents of Warsaw and Poland. Following in the wake of the architectural competition for the Museum building, another international competition was launched, this time for an “info point” to be located at the construction site. It was organised together with the Bęc Zmiana Foundation, which was the first institution to use urban space for social and cultural activities. Twenty-nine projects from various countries were submitted. On 1 June 2006, the jury, headed by Anda Rottenberg, announced the winner - Polish architectural studio “Centrala – Grupa Projektowa”. To quote Ms Rottenberg: “We were seduced by the form of a tent, by its non-permanent nature. It is a project for people on the move.”

The Official Opening of the Ohel took place in November 2006. It took the form of a light blue, open tent, its shape reminiscent of the undulating walls of the Museum’s main hall. In Hebrew, the word ohel means a tent’.

The tent was represented at the How To Build a Museum temporary exhibition, as a specially arranged space. It was separated from the rest of the exposition by textiles featuring large-format photos of the Ohel which hung from the ceiling. A film documenting events held at the Ohel was screened on one of the textile walls in the middle - the viewers could watch it while sitting on soft beanbags. An imitation of the information pillar, featuring posters of the events, was also located within the space. In addition, there were also audio commentaries on the ideas of an open museum, culture 2.0, microhistory and oral history – all of which were reflected in the activities organised at the Ohel. 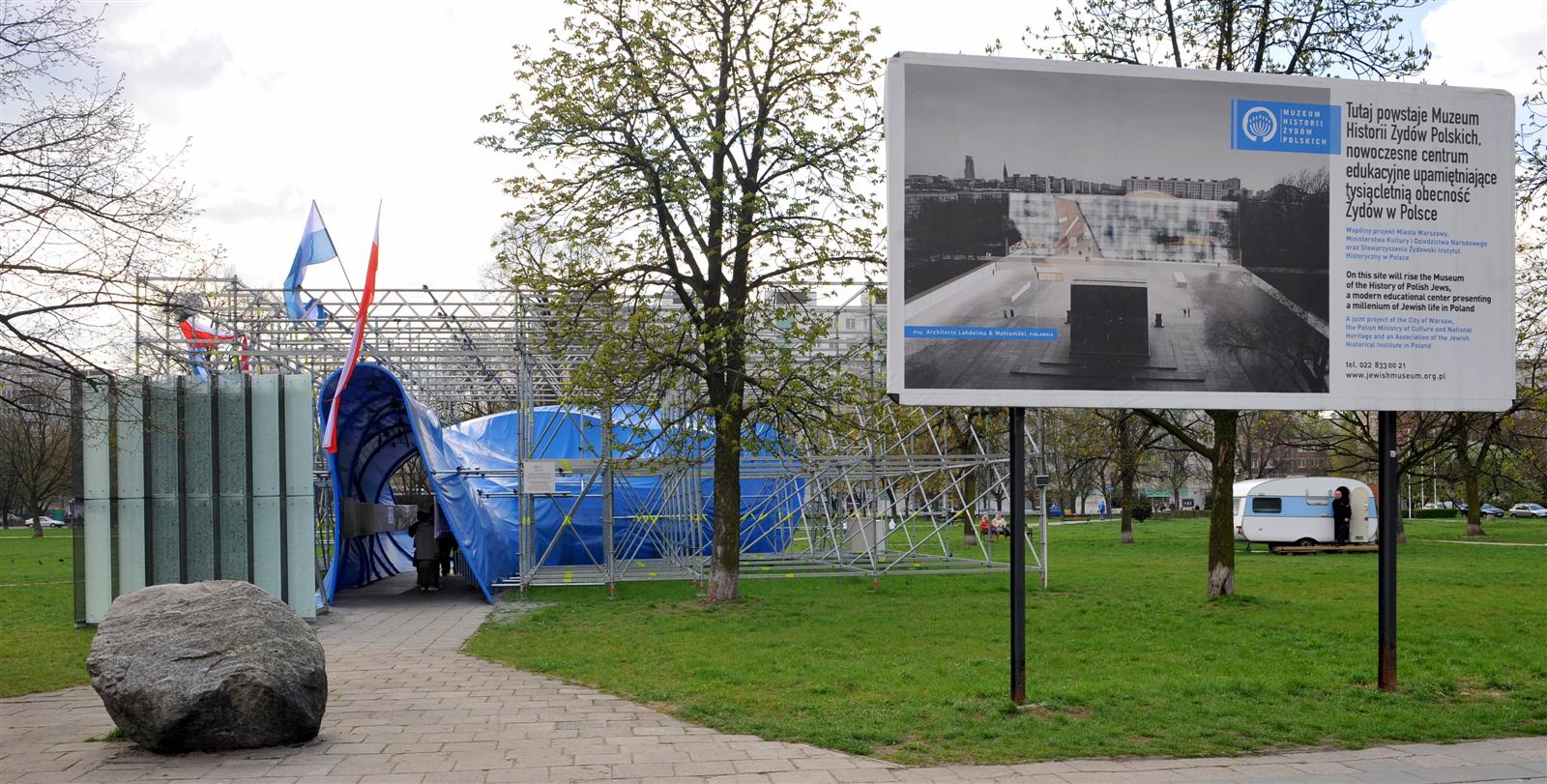 The signing of the contract was preceded by several months of project modification in accordance with comments made by the Museum staff and the designers of the core exhibition. Studio Lahdelma & Mahlamäki selected a partner Polish architectural studio - Autorska Pracownia Architektury Kuryłowicz & Associates.

The next step was laying of the foundation stone. This took place on 26 June 2007 at a ceremony in the presence of the then Polish President Lech Kaczyński who, in his address during the event, stated that "This Museum is a great opportunity to, on the one hand, end a mutual lack of knowledge and, on the other, to deepen our mutual reconciliation". Others present included Hanna Gronkiewicz-Waltz, Mayor of Warsaw, and Meir Lau, Chief Rabbi of Tel Aviv. The foundation stone contained the words: "At the intersection of these old streets, Gęsia and Zamenhofa, in the former Jewish district of Warsaw destroyed by the Nazi occupiers of Poland, we lay this foundation stone under the structure of the Museum of the History of Polish Jews."

On 25 June 2008, the Capital City Development Board, which the city had entrusted the management of the project, put the construction officially out to tender. The successful tender was submitted by Polimex-Mostostal. Construction commenced on 30 June 2009.

6. The Official Opening of the Museum of the History of Polish Jews

The official opening of the Museum building took place on 19 April 2013 with the participation of representatives of Polish state authorities and guests from around the world. Activities, long-planned for, were now implemented. They included cultural and educational projects, theatrical performances, musical performances, film screenings, as well as educational activities for children and families, plus public lectures. However, Museum guests would still have to wait a while longer in order to visit the core exhibition.

The Grand Opening of the core exhibition of POLIN Museum of the History of Polish Jews took place on 28 October 2014 and was the most important event for the Museum to have taken place in that year. The exhibition was symbolically opened by representatives of two different generations of the Polish Jewish community - Marian Turski, Chairman of the Museum Council, Holocaust Survivor and thirteen year old Joasia Widła, a graduate of the Lauder-Morasha School in Warsaw. Guests had the opportunity to view the core exhibition and, in the evening, could join in the outdoor concert Gramy Otwarcie! Those present at the Opening included Polish President Bronisław Komorowski, Israeli President Reuven Rivlin, Polish Prime Minister Ewa Kopacz, Speakers of the Polish Sejm and Senate, the Mayor of Warsaw and representatives of many countries from around the world. More than 1,500 guests were invited to the Opening and the event was covered by more than 600 journalists.

A rich programme of events followed on 28-30 October 2014. Special tours were arranged for representatives of the Jewish community, journalists, residents of Muranów and for the Museum donors. Many educational and artistic events also took place relating to the themes of the core exhibition, as well as to its creation and the creation of the Museum itself. Contemporary Jewish culture was also presented.

History: from the Idea, through the Ohel, to the POLIN Museum