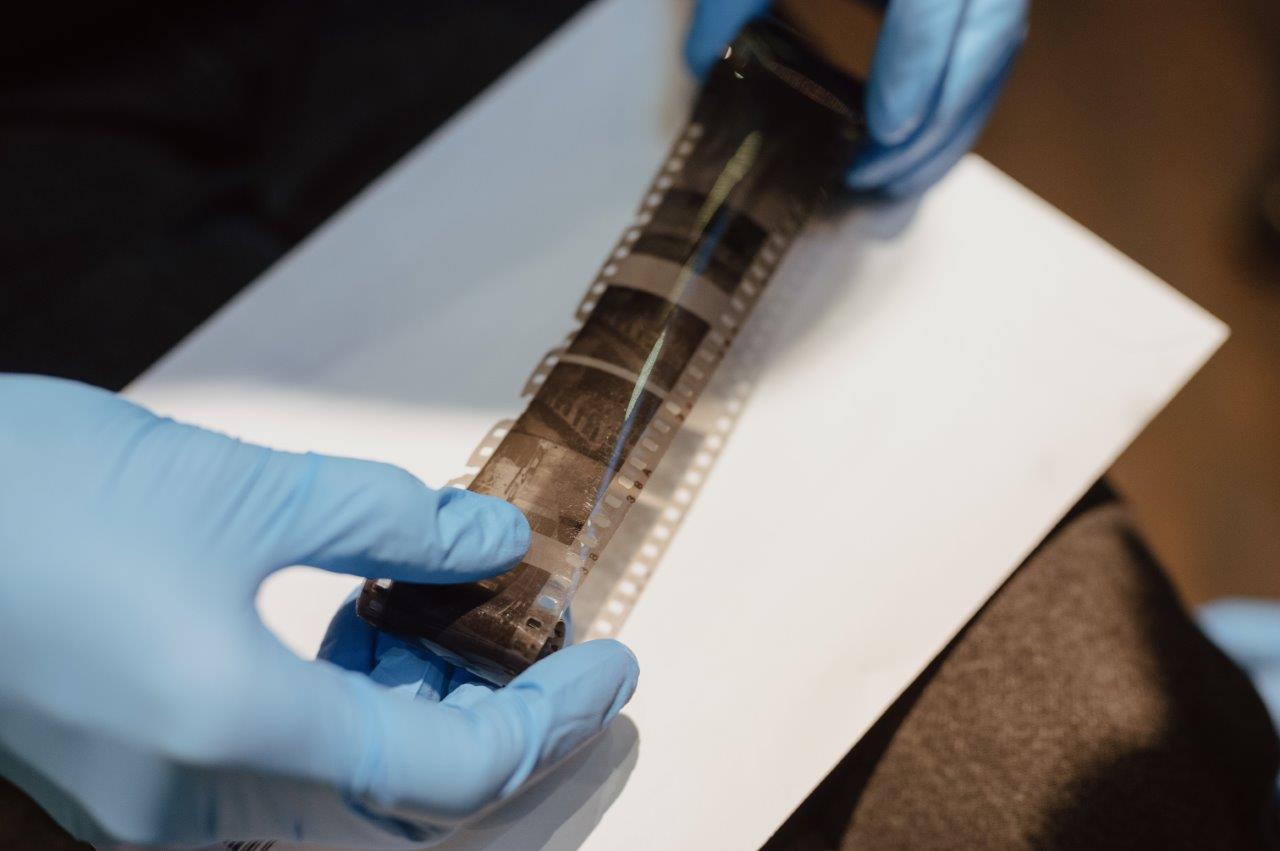 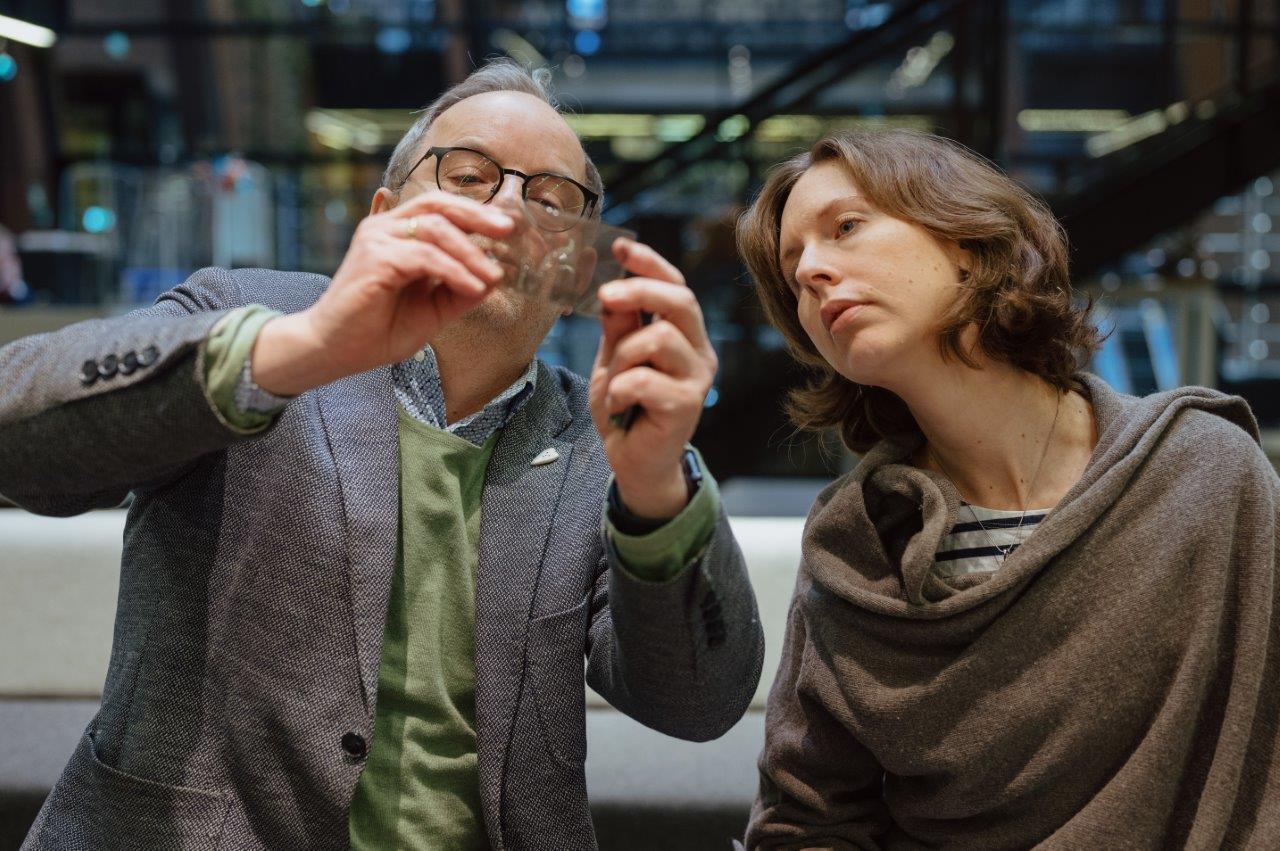 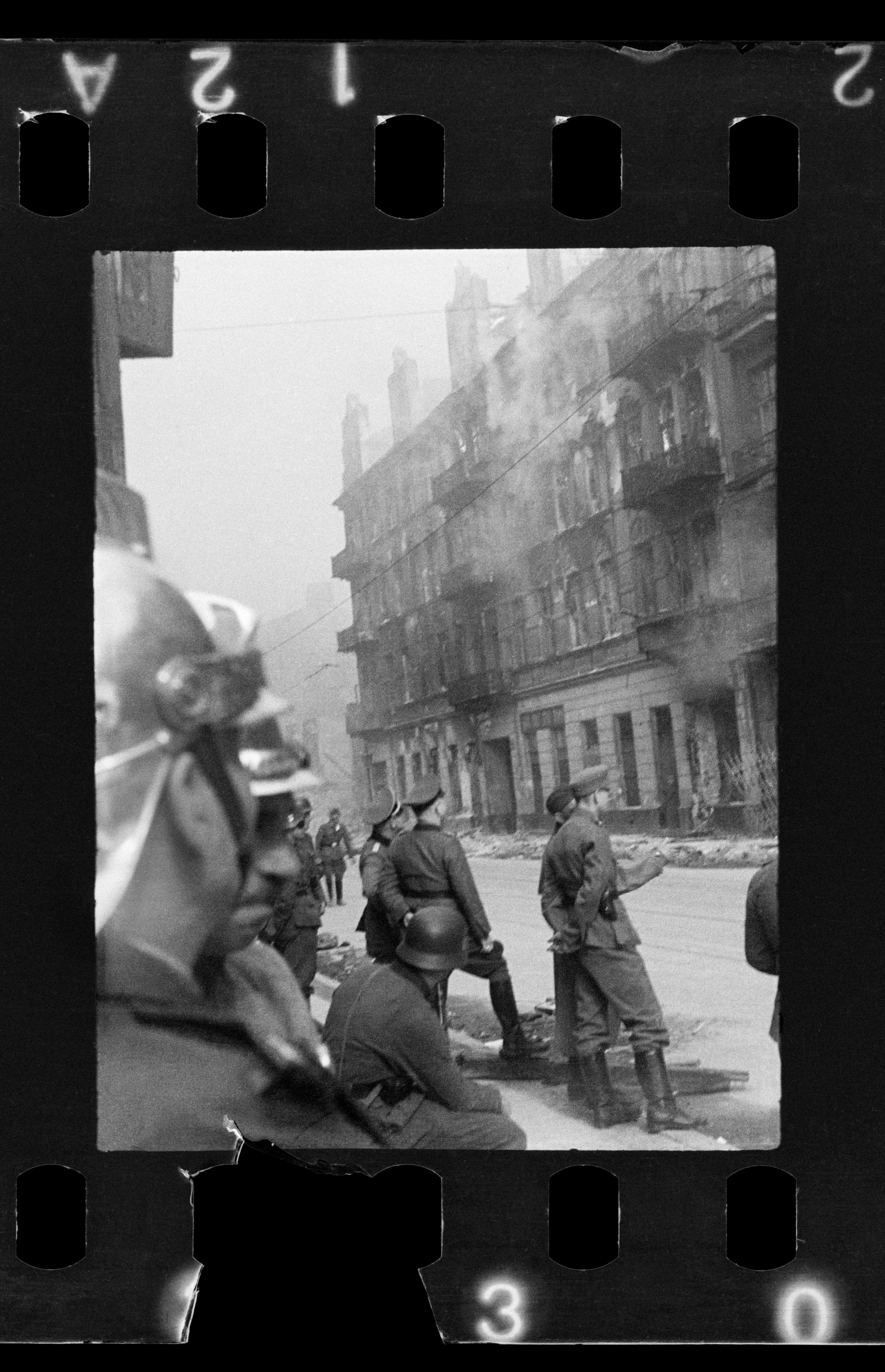 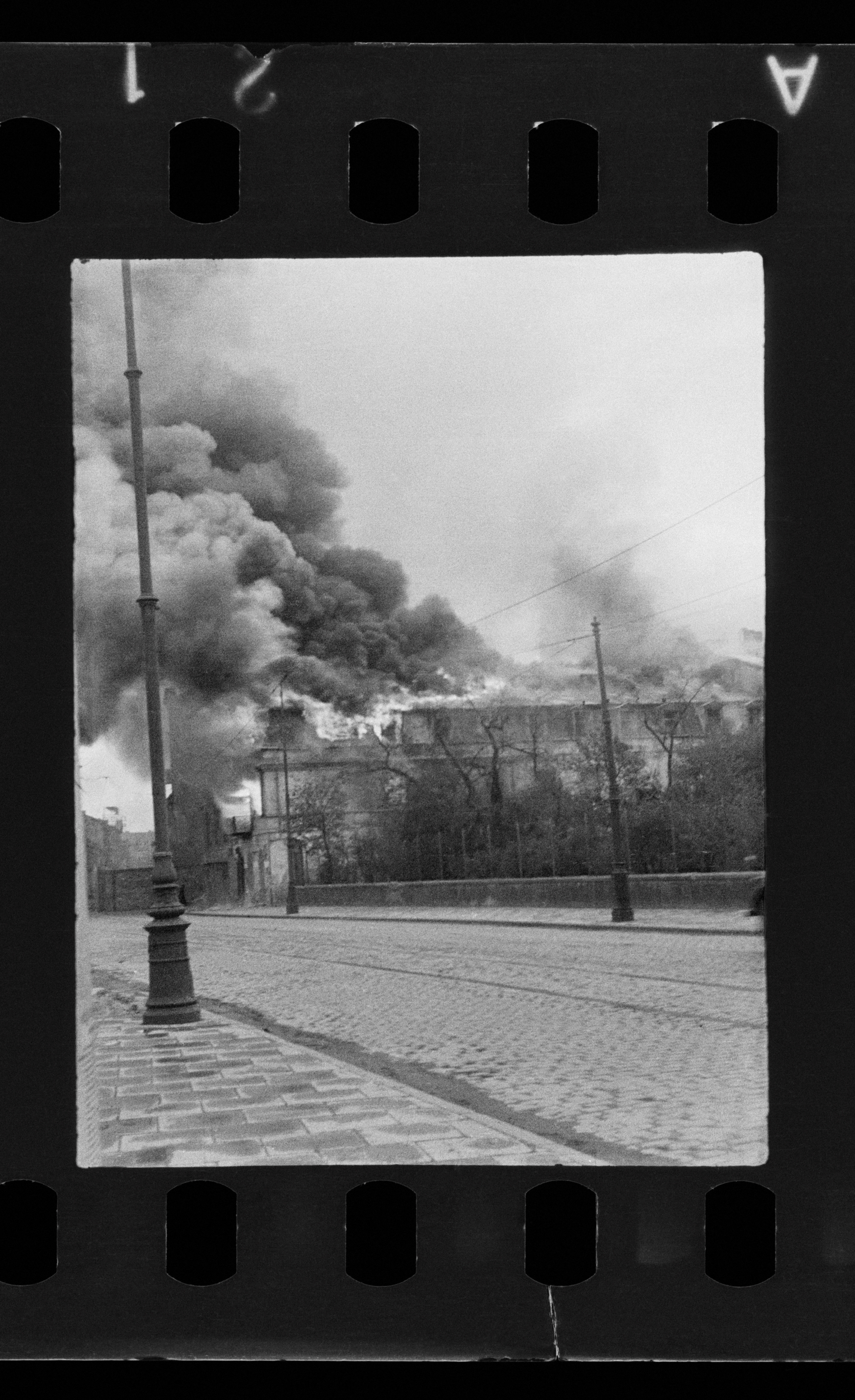 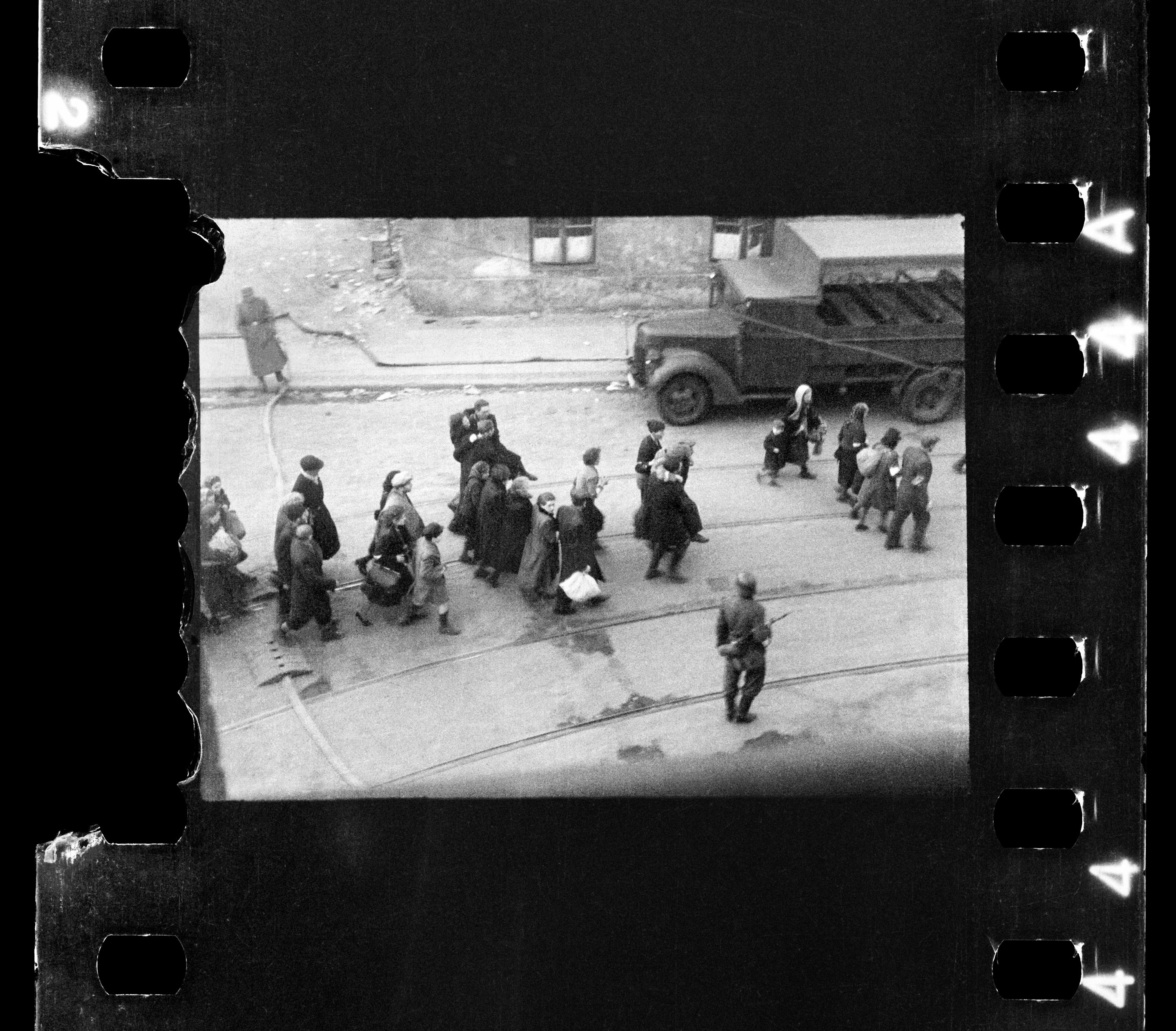 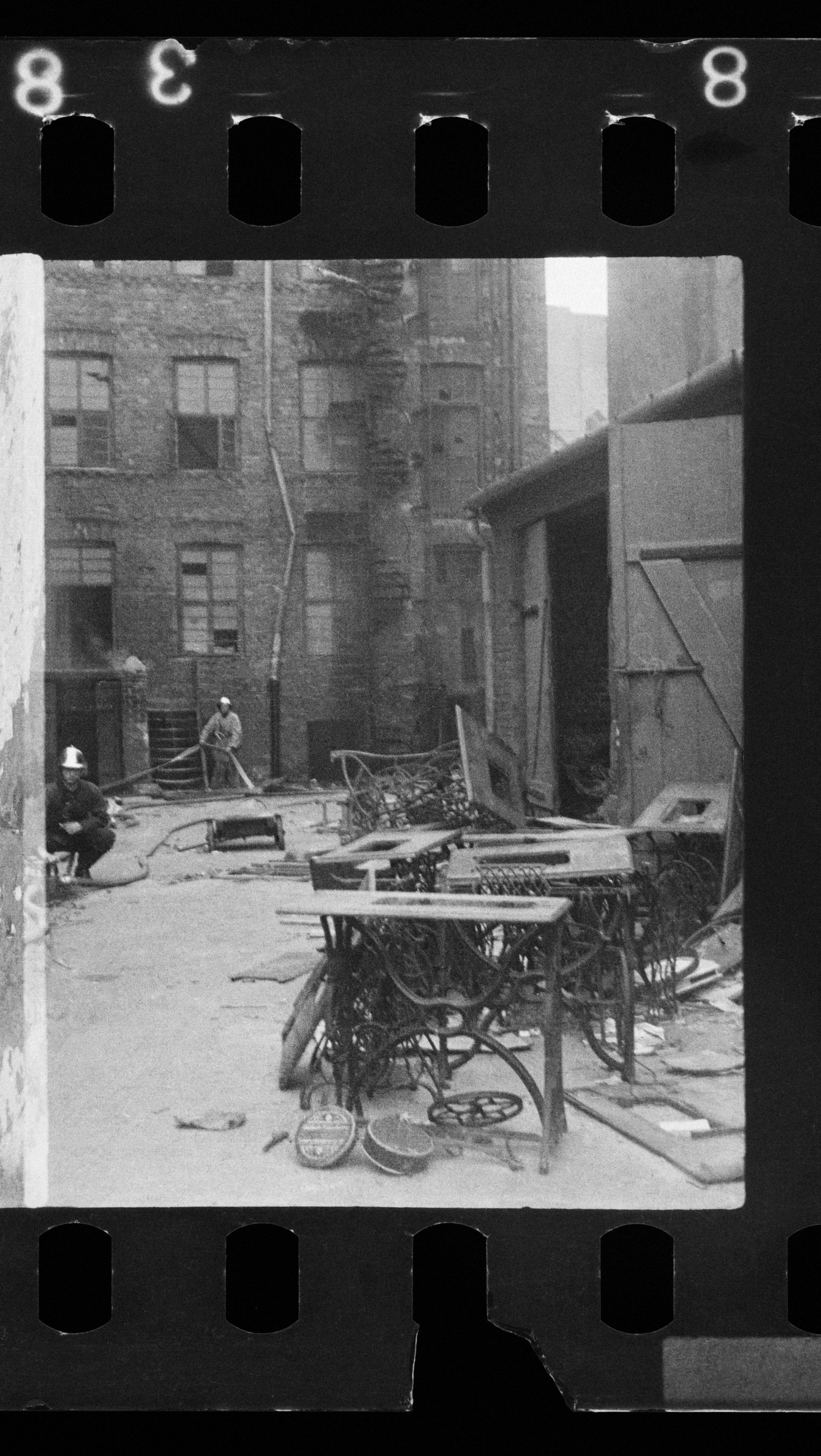 After nearly 80 years, a roll of original negatives of Zbigniew Leszek Grzywaczewski’s photos from the Warsaw Ghetto Uprising have been discovered among the family keepsakes.

In early December 2022, after several decades, a photographic film was discovered amongst family keepsakes. It contains a set of photos taken during the Warsaw Ghetto Uprising by Zbigniew Leszek Grzywaczewski, a firefighter at the Warsaw Fire Brigade during the Second World War. The Germans sent the firefighters into the burning ghetto—their job was to ensure the fire did not spread to the houses on the “Aryan” side. It was then that 23-year-old firefighter took the photos.

The images in the photos are often blurred, recorded in a rush, from a hidden location, partially obscured by elements of the immediate surroundings—a window frame, a wall of a building or figures of people standing in the foreground. The photos, albeit so imperfect, are priceless. These are the only photos that we know of taken inside the ghetto during the Uprising whose authors are not the German perpetrators.

The search for the negatives lasted several months. Maciej Grzywaczewski, son of the photographer, was asked by the curators of the exhibition "Around Us a Sea of Fire. The Fate of Jewish Civilians During the Warsaw Ghetto Uprising" to look through his father’s photographic archive. He discovered the negatives in the very last box.

A total of forty-eight shots were recorded on the film, thirty-three of which depict the ghetto. Aside from the twelve photos that have been published before, held in the form of prints at the Holocaust Museum in Washington and the Jewish Historical Institute, there are images that have never been shown before. These are photos depicting the smoke over the ghetto as well as in the streets and courtyards inside the ghetto, burnt-out houses, firefighters putting out the flames, posing on the roof of a building or eating from mess tins in the street. Many images are repeated, especially those of the burning buildings, the ghetto wall and people being led to Umschlagplatz. It seems that Leszek Grzywaczewski tried his best to record these scenes, realising the importance of documenting events inaccessible to the eyes of people on the other side of the ghetto wall.

The photographic film presents a hitherto unknown sequence of individual frames. It testifies to the fact that the author entered the ghetto with his camera more than once. The intensity of light in the photos proves that they were taken at different times of day and in different weather conditions. The frames from the ghetto are interspersed with images of a walk in the park.

The author of the photos spent nearly four weeks in the ghetto (most likely between 21 April and 15 May 1943). In a diary he kept during wartime, he noted:

"The image of these people being dragged out of there [out of the bunkers—ZSK] will stay with me for the rest of my life. Their faces […] with a deranged, absent look. […] figures staggering from hunger and dismay, filthy, ragged. Shot dead en masse; those still alive falling over the bodies of the ones who have already been annihilated."

There is no information in the diary on taking photos in the ghetto. However, by discovering negatives among his family keepsakes, Maciej Grzywaczewski made it possible to confirm their authorship.

In 2023, POLIN Museum is running an annual program "Thou Shalt Not Be Indifferent. 80th Anniversary of the Warsaw Ghetto Uprising". The key element of the program is a temporary exhibition titled "Around Us a Sea of Fire. The Fate of Jewish Civilians During the Warsaw Ghetto Uprising" which will open in April. Professor Barbara Engelking, head of the Center for Holocaust Research at the Institute of Philosophy and Sociology, Polish Academy of Science, is the author of the exhibition concept, Zuzanna Schnepf-Kołacz of POLIN Museum of the History of Polish Jews is the curator. The exhibition is co-organised by the Association of the Jewish Historical Institute of Poland and the Center for Holocaust Research.

In the exhibition "Around Us a Sea of Fire", which opens on 18 April, we will show the negatives as the original material from which the prints and their copies were subsequently made. Some prints travelled the world, published in books or displayed in exhibitions. Finding their negatives is akin to reaching the source—the first original recording which contains all the frames and points to the sequence in which they were taken. We can see images from the Uprising we have never seen before, or spot new details and fragments of the frames that were cut from the prints. The story of their author and the context in which they were taken are just as important. The knowledge of the context in which this material came into being enables us to fully understand it and to perceive it as a testament that goes beyond registering images of the Uprising.

Zbigniew Leszek graduated from the Stefan Batory No. 2 High School. Among his schoolmates were, i.a., Jan Bytnar and Maciej Dawidowski. He passed his matura exam [marking the end of high-school education] in 1939. From 1941, he worked for the Warsaw Fire Brigade. Photography was his passion. He took photos throughout the German occupation, including those taken during the Warsaw Ghetto Uprising. He was also a Home Army soldier. He fought in the Warsaw Uprising and was wounded in the leg.

After the war had ended, Zbigniew Leszek worked at the Fire Station in Katowice. Next, he graduated from the Ship Building Faculty at the Polytechnic in Gdańsk. He worked for the Polish Registry of Shipping and at the Maritime Institute. He also edited Budownictwo Okrętowe magazine. He was a member of the Association of Friends of the Maritime Museum, and the author of, among others: "Ilustrowana Encyklopedia: Okręty i Żegluga"; "Walka z pożarami na statkach"; "Wspomnienia Strażaków uczestników Powstania Warszawskiego"; "Żeglarz, Człowiek Morza". He passed away in Gdańsk on 28 August 1993.

Maciej Grzywaczewski was born on 17 November 1954 in Gdańsk, son of Maria and Zbigniew Grzywaczewski. In the 1970s he was active in the democratic opposition—he was one the co-founders of the Independence Movement, Movement for Defence of Human and Civil Rights, and the Young Poland Movement. He is also a co-author of the plaques bearing twenty-one postulates of workers on strike in 1980.

Maciej is a producer of television programmes and films. In the years 1988-2004 he headed the Profilm Film Agency, and in the years 2004-2006 he was the director of TVP1 National Television Channel. He was also vice-president of the management board of the ATM Grupa SA listed media company. He is the founder of the Aram Rybicki Foundation and the Video Studio Gdańsk Foundation. In the years 2000-2022, he was on the board of the Solidarity Centre Foundation.

"Around Us a Sea of Fire. The Fate of Jewish Civilians During the Warsaw Ghetto Uprising" exhibition

In 2023, we invite you to an exhibition which commemorates the 80th anniversary of the Warsaw Ghetto Uprising.