“Museum on Wheels” has completed its second tour of Poland! 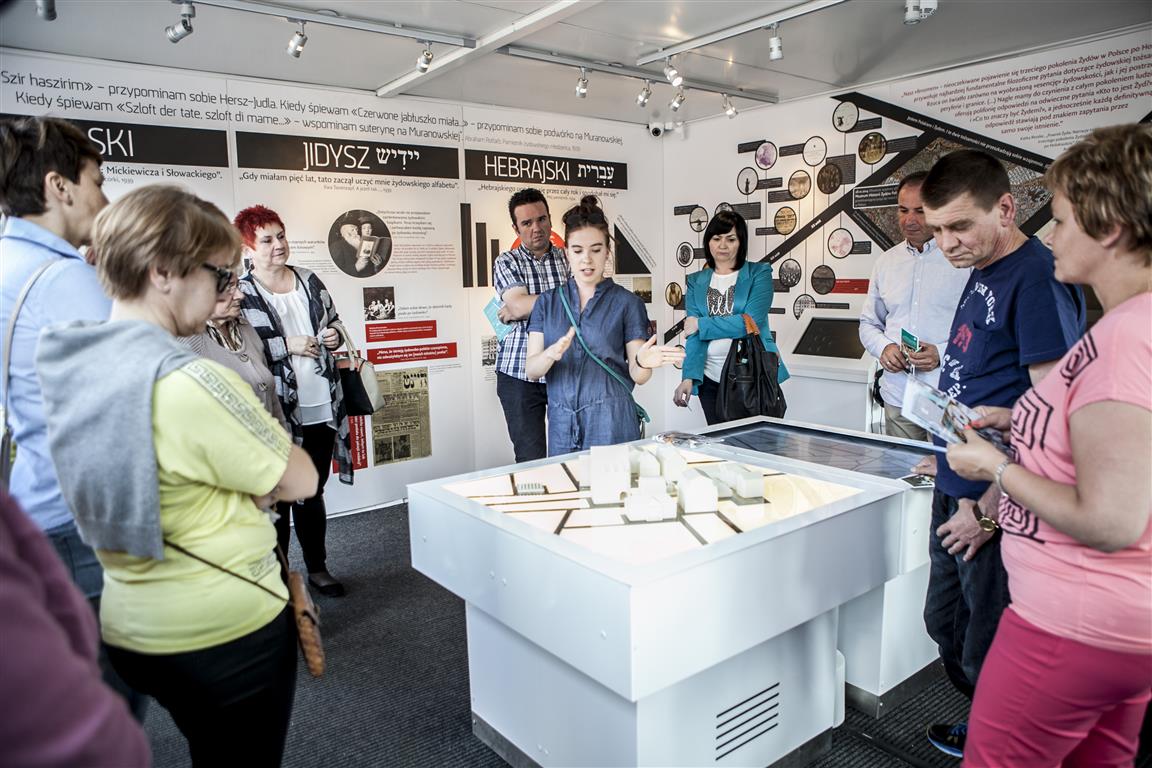 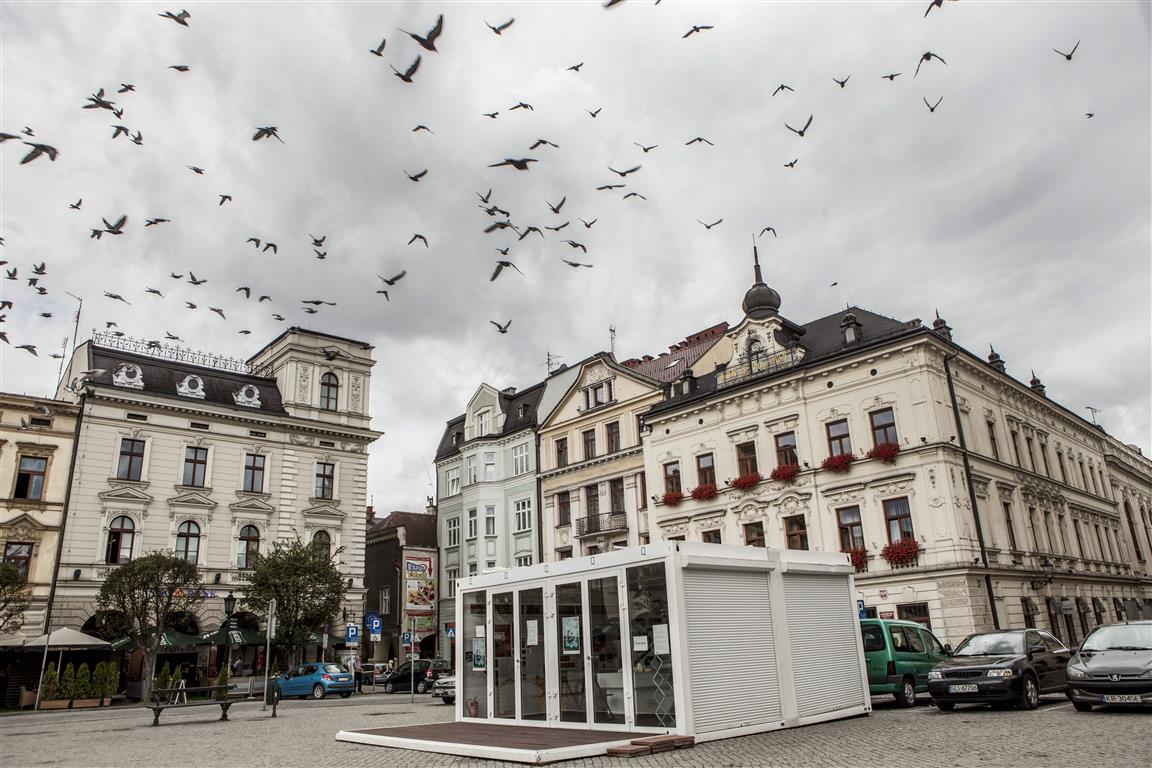 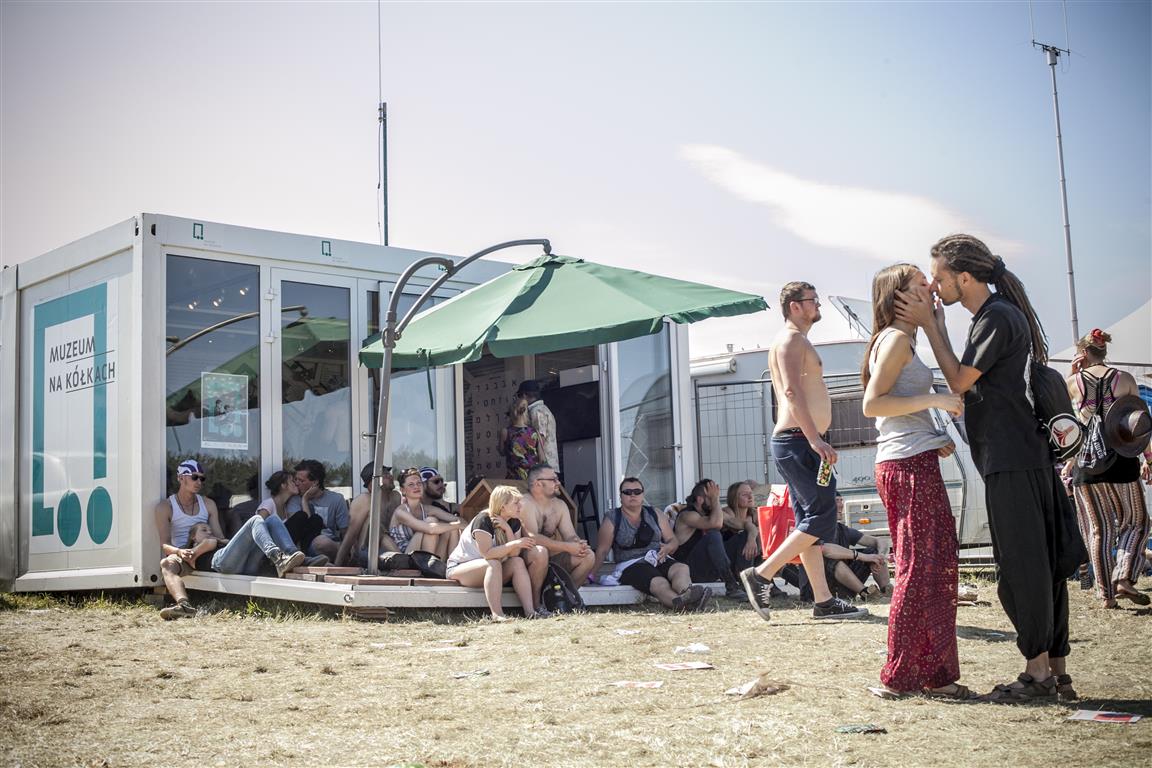 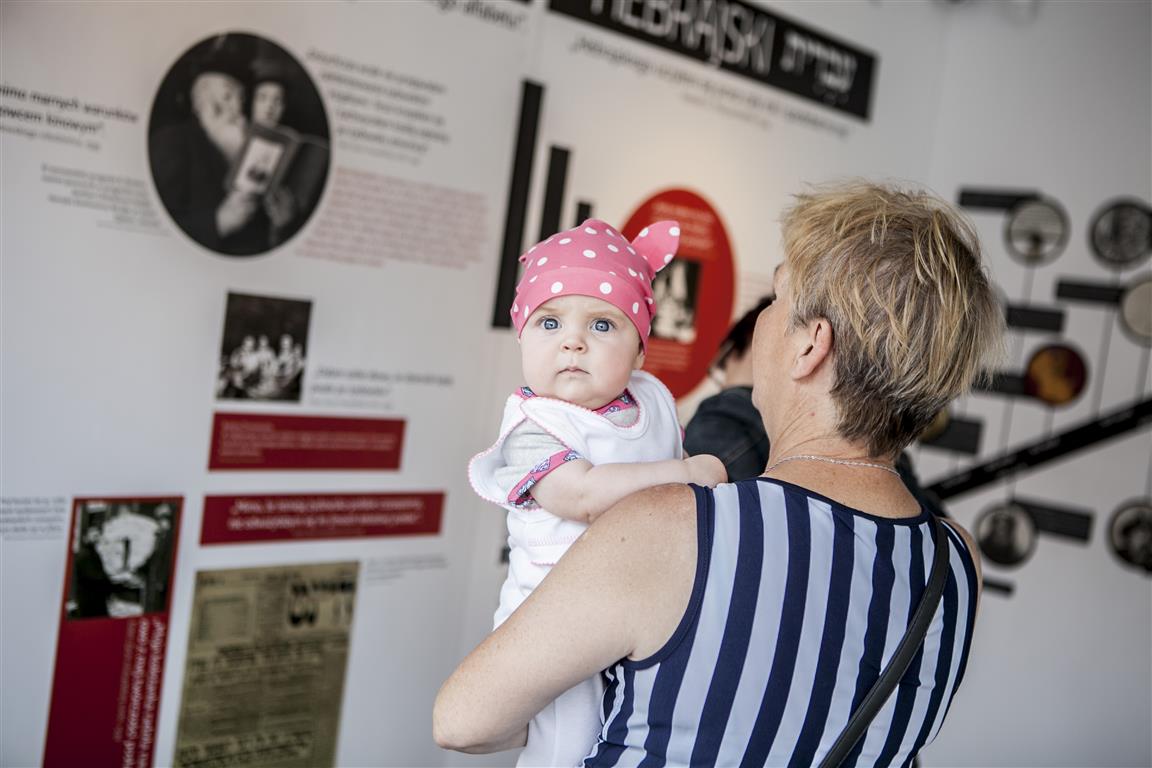 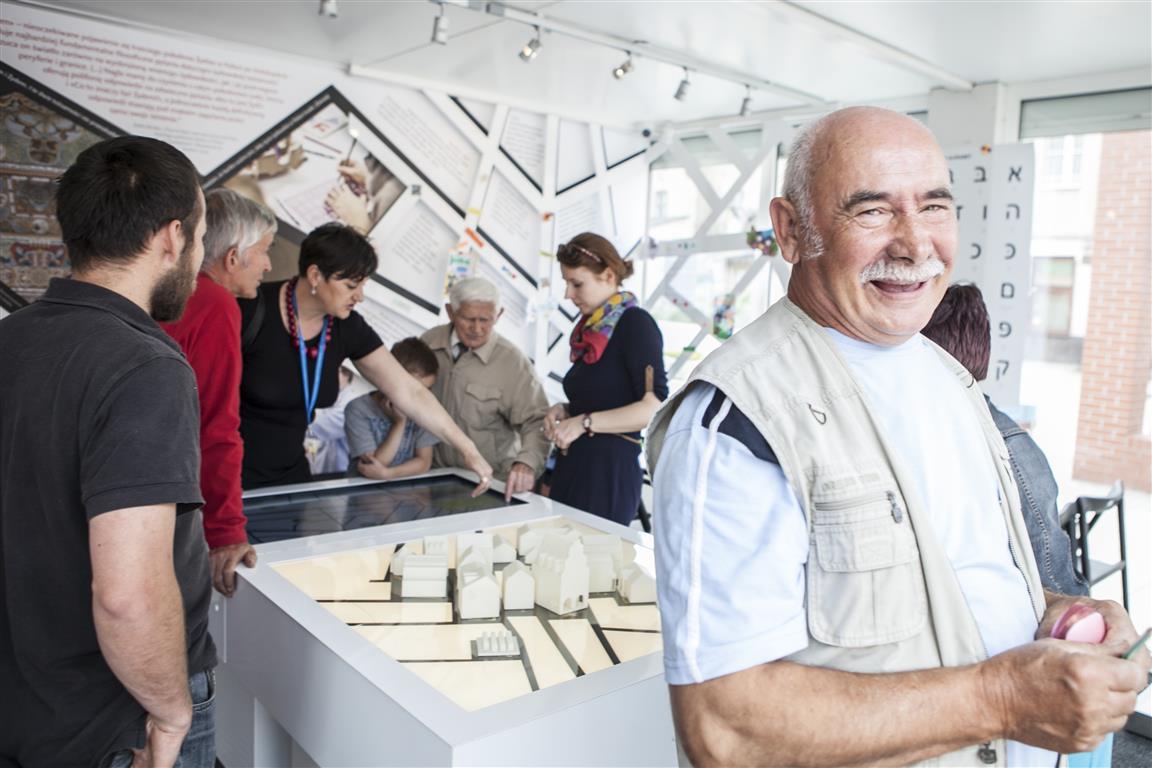 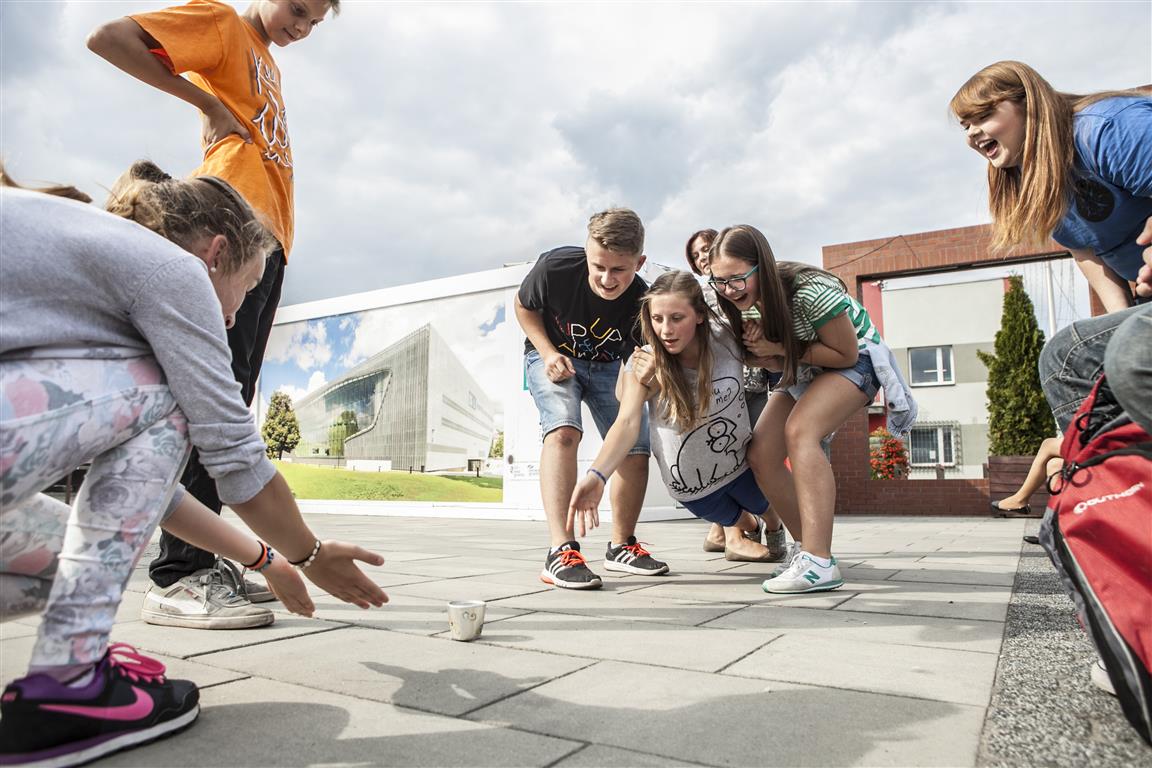 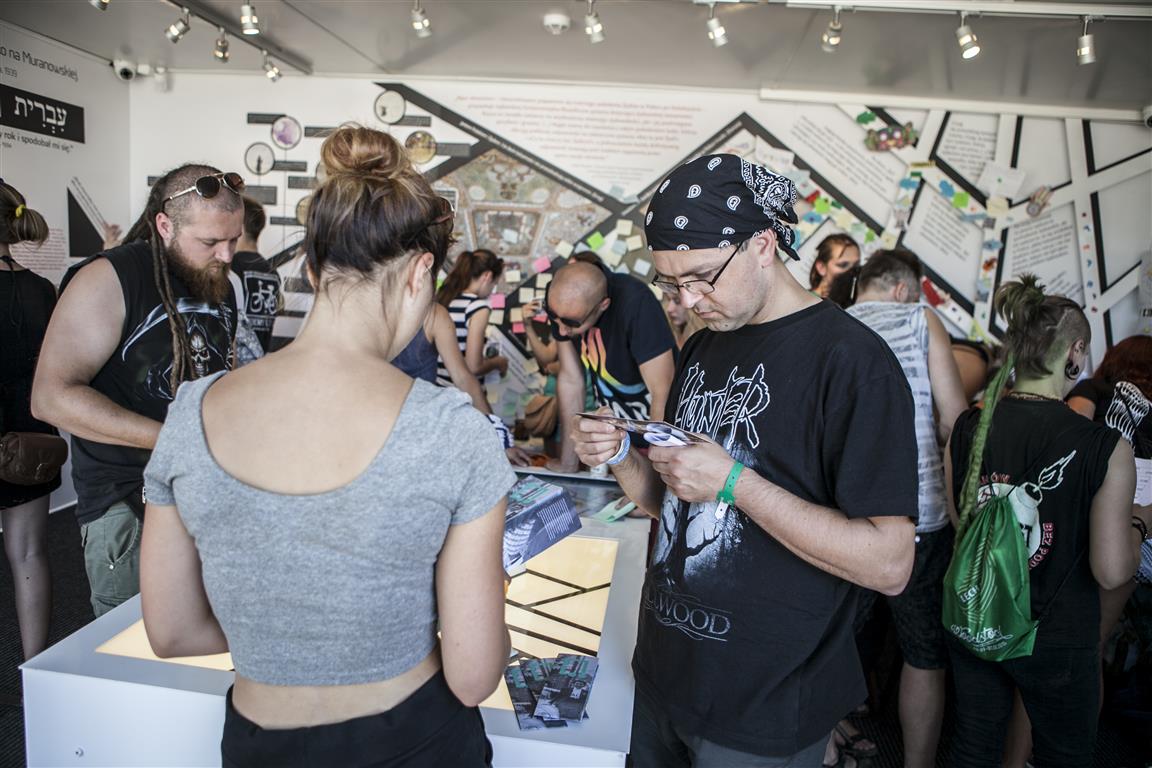 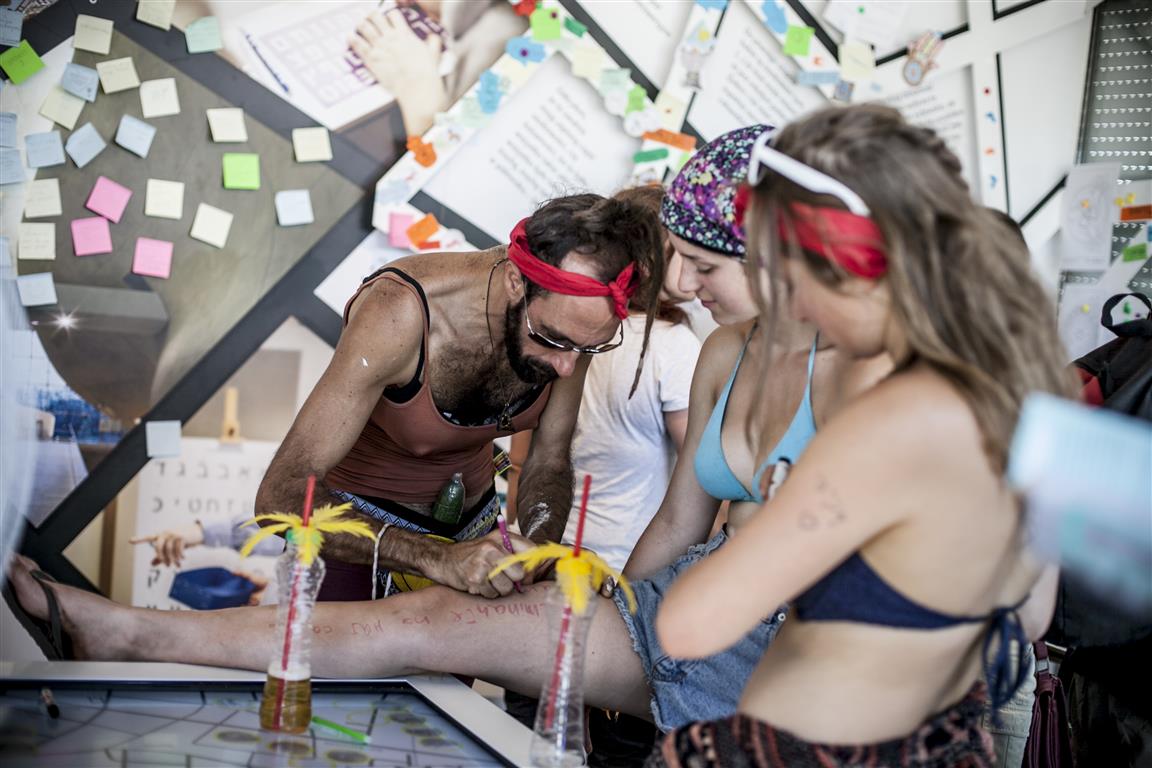 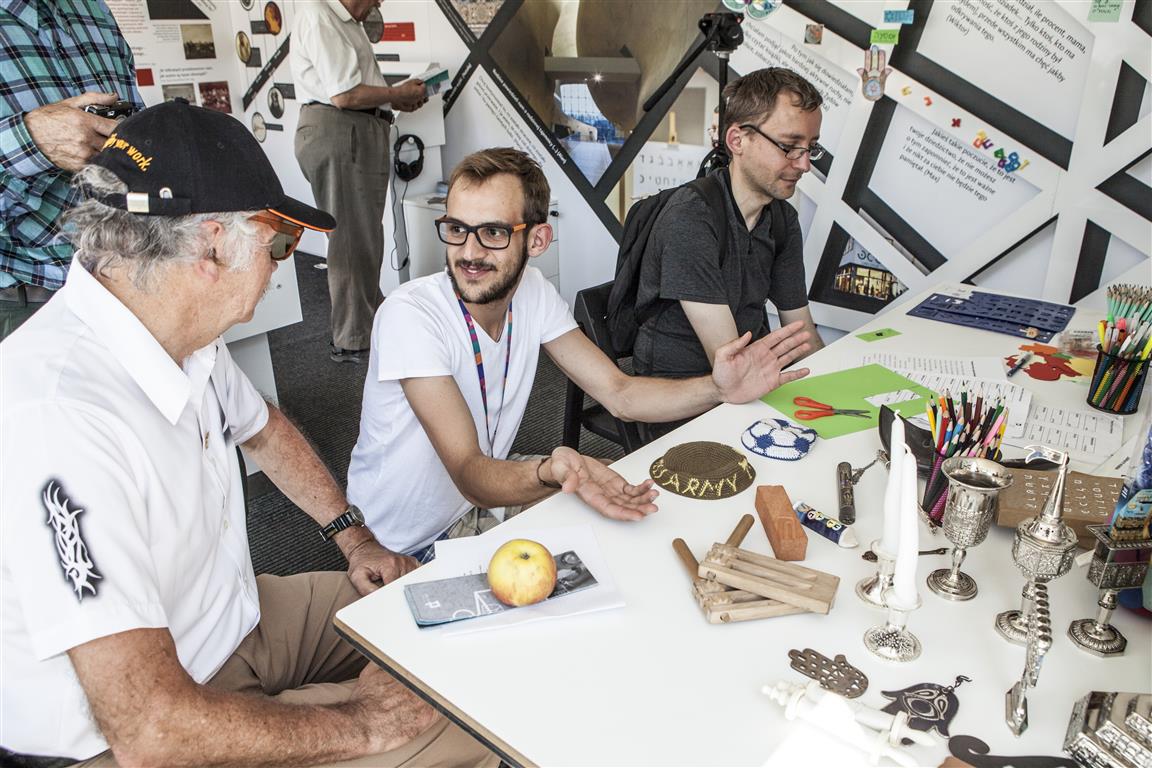 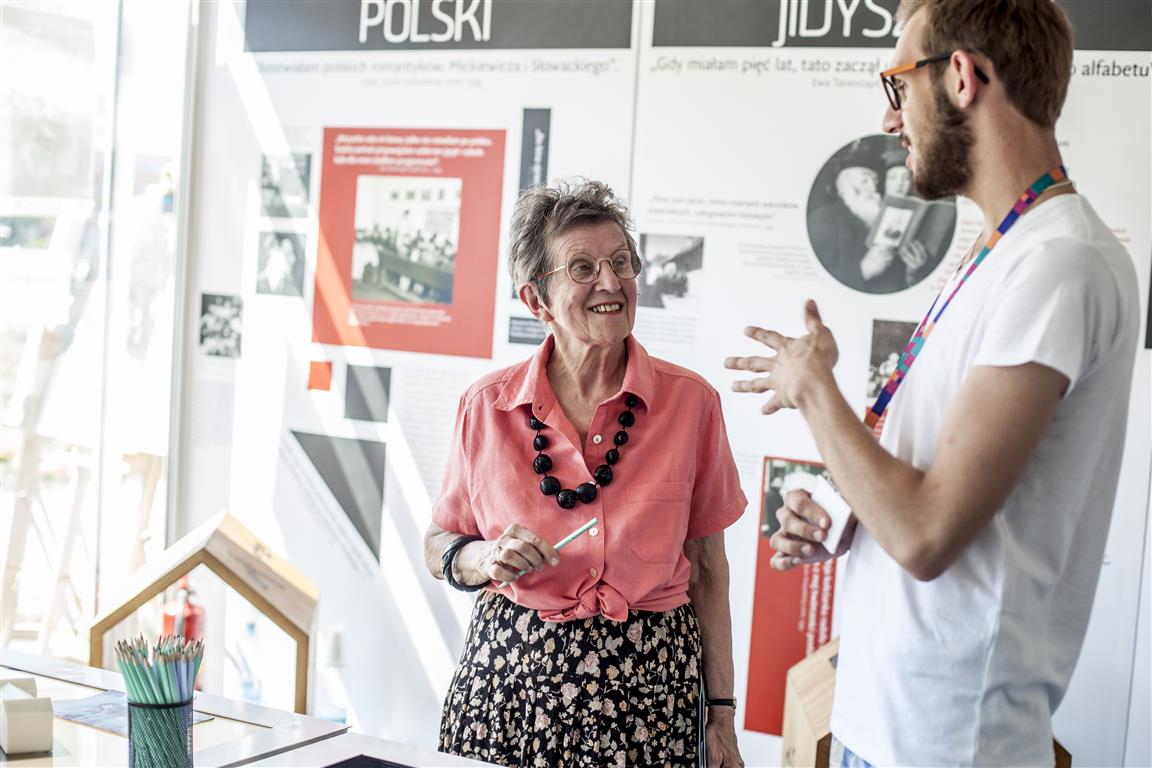 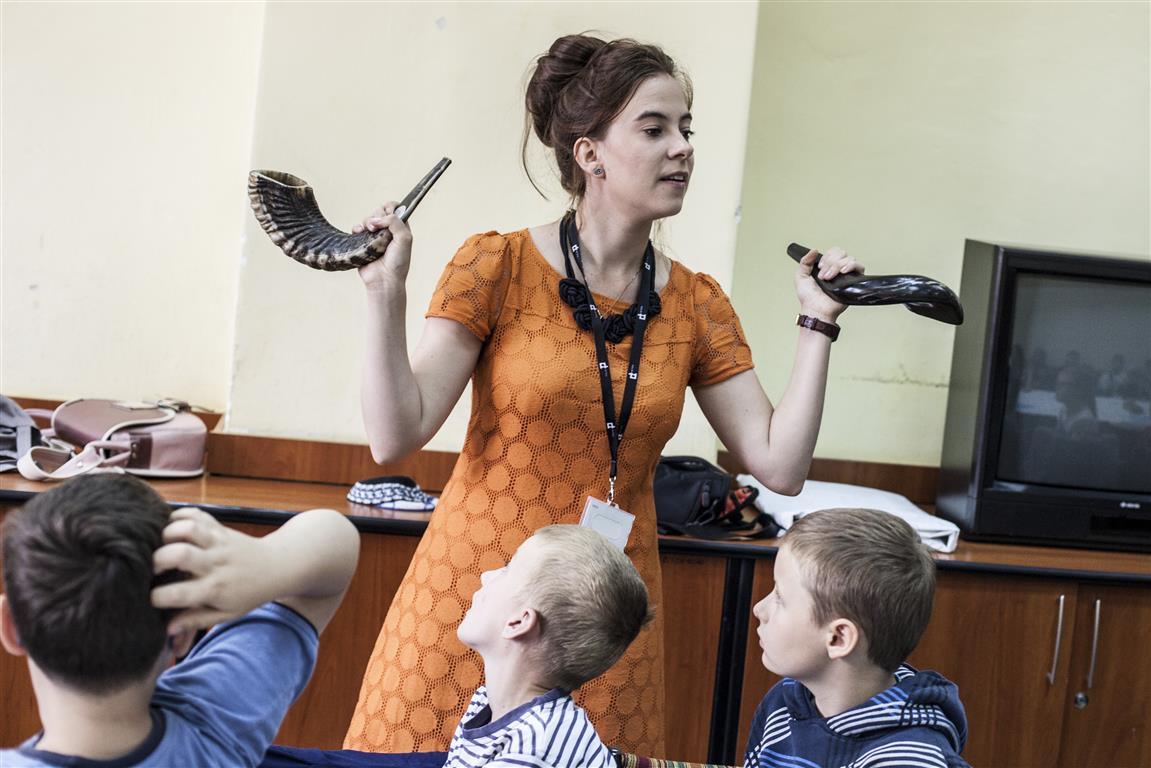 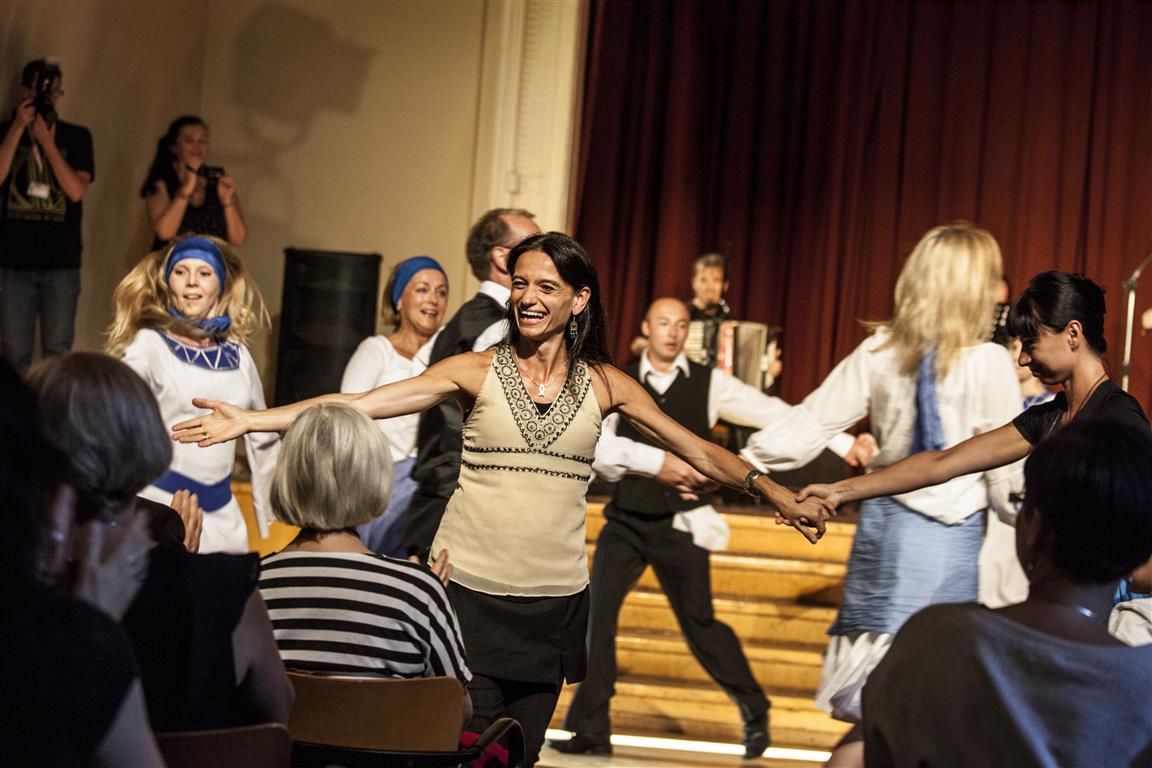 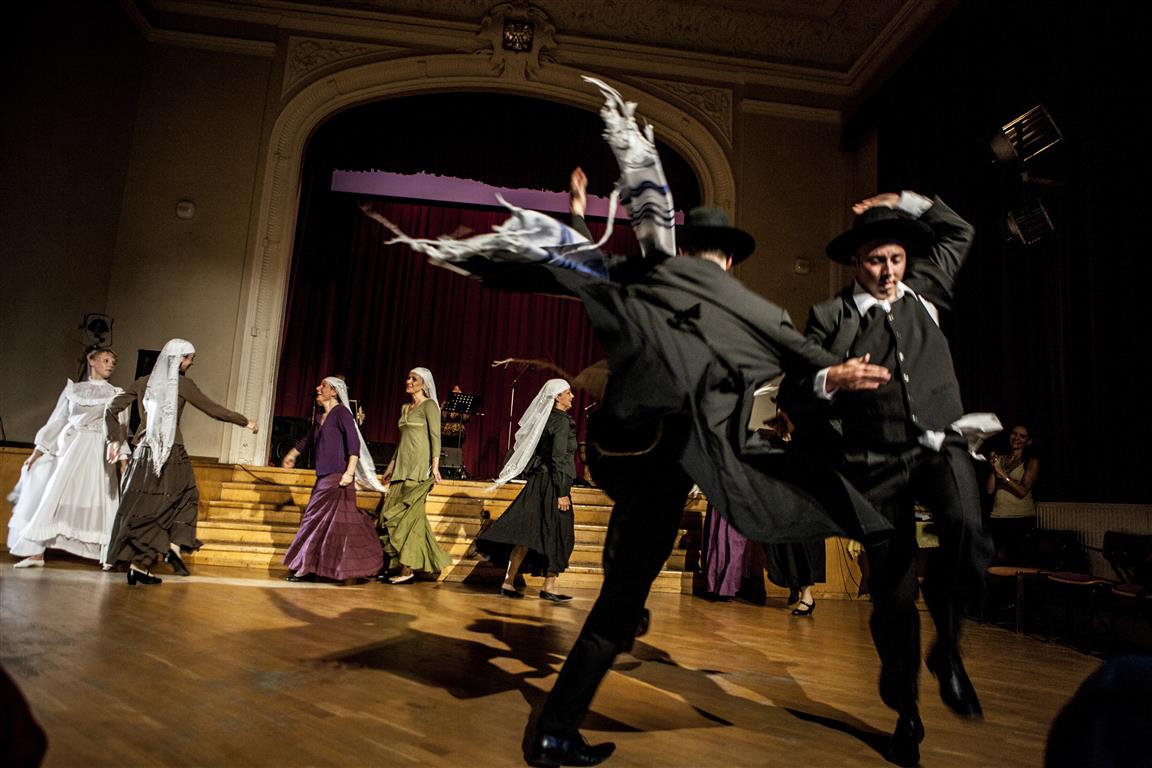 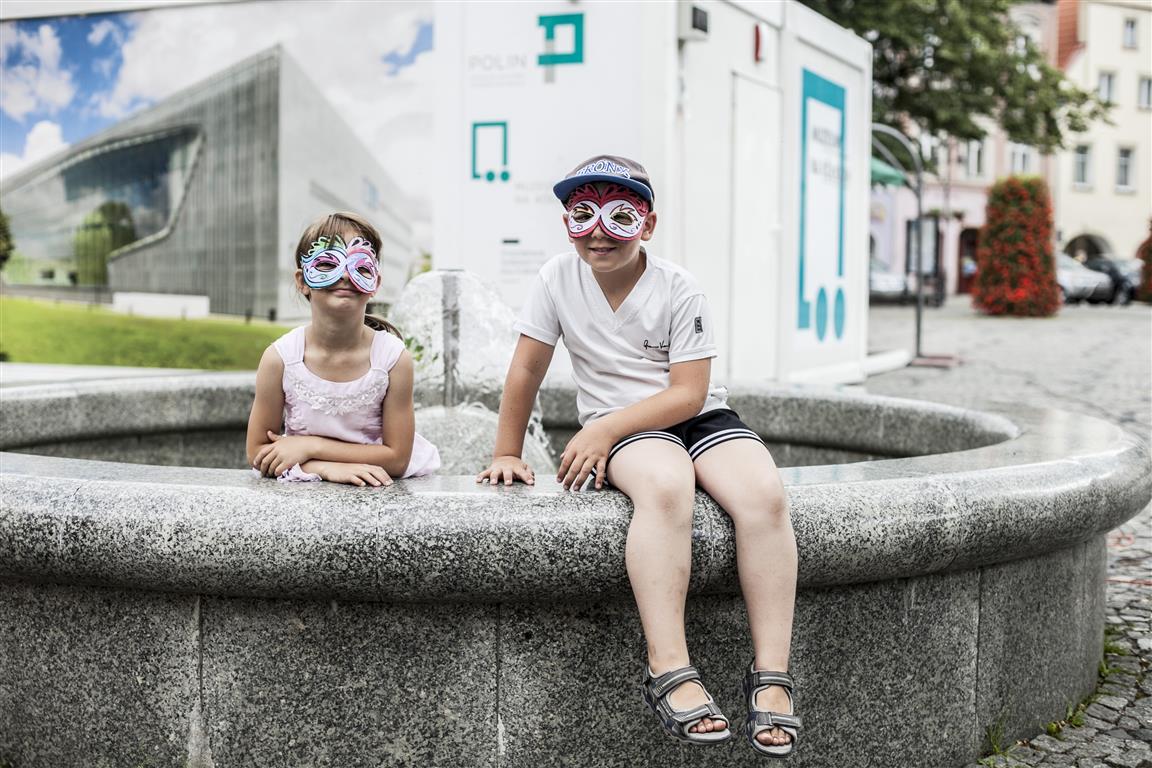 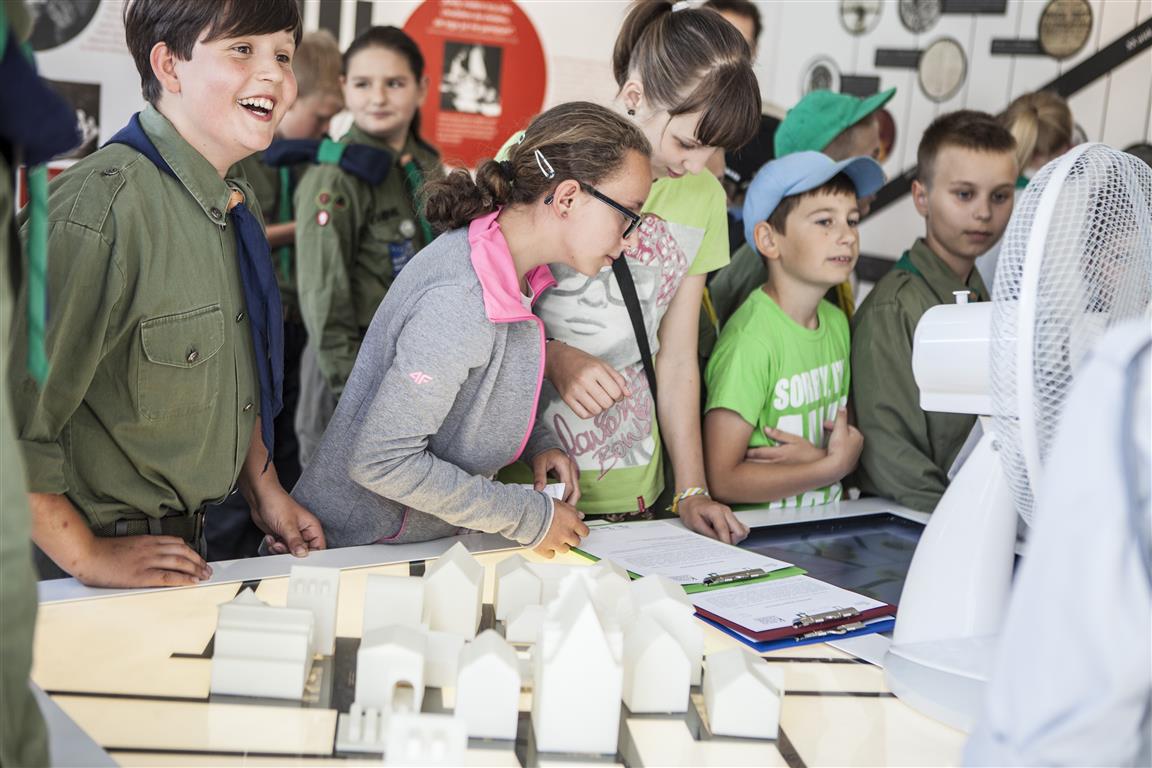 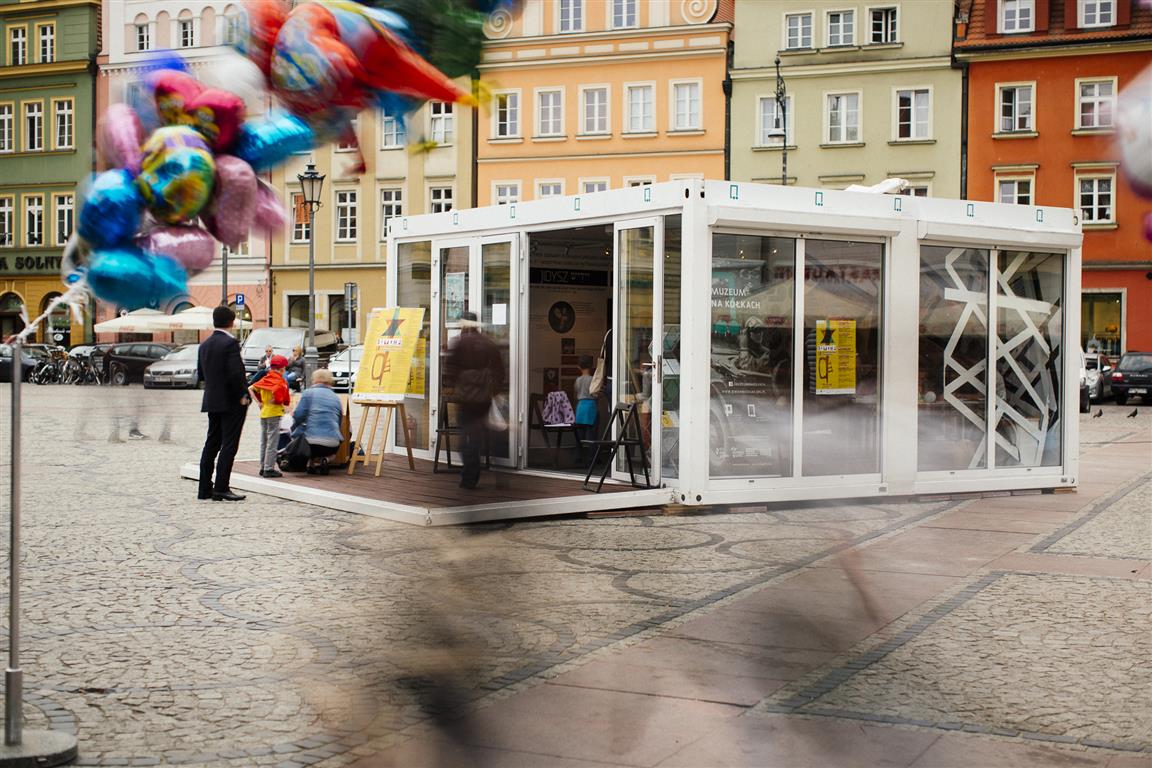 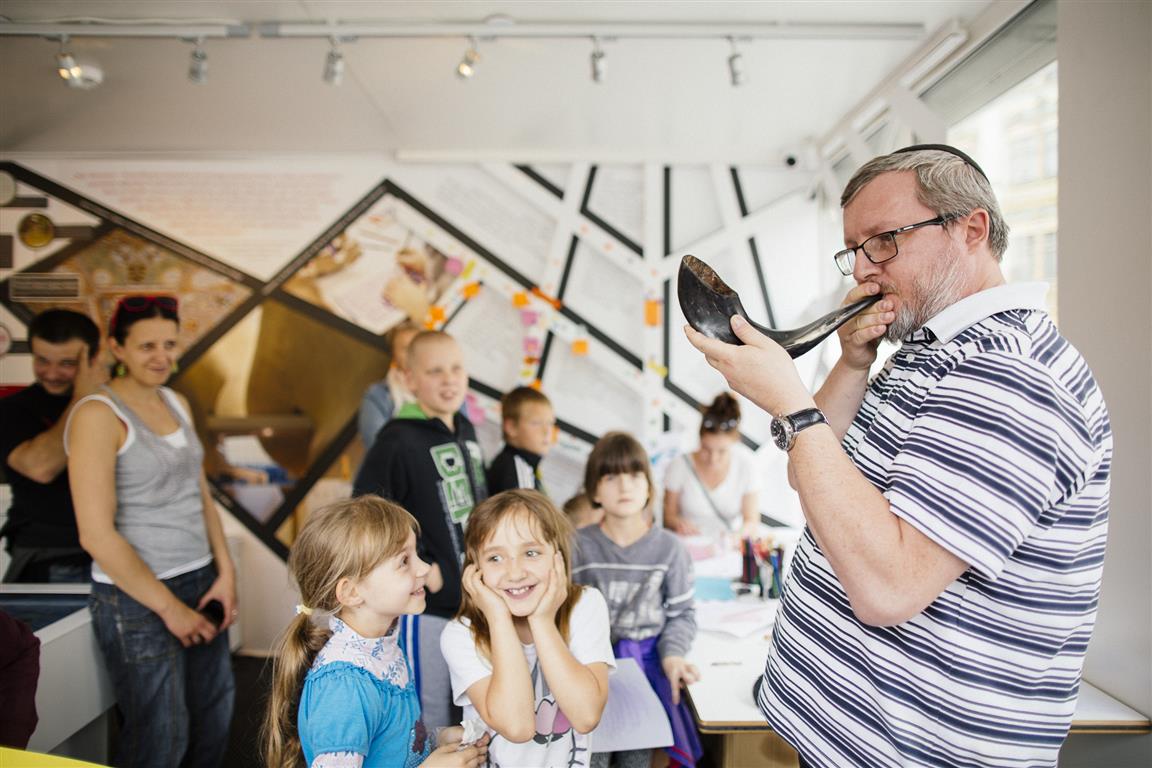 “Museum on Wheels” is an educational mobile exhibition which summarises a thousand years of Jewish history in Poland. The project visits cities where, before the war, Jews formed several up to a dozen or so per cent of the society. Our travelling Museum is first and foremost a token of our gratitude towards local organisations and individuals who have devoted their time and resources to looking after traces of Jewish presence in their city. It was together with them that we prepared a programme of events accompanying the exhibition, including workshops, urban games, walks, lectures, discussions, concerts, meetings with people who have witnessed history, cleaning of the Jewish cemetery, meetings with representatives of the Jewish religious community, museum classes, open-air exhibitions, photographic contests, happenings, film screenings, bike rally, and more.

During the four months it had spent en route (May to August), around 25 thousand people took part in its activity.

Thanks to the efforts of our coordinators, it was possible to target the events accompanying the exhibition at people from all age groups. We were particularly glad of the interest and involvement of elder people. One of the local initiatives was an urban game – materials connected with it will be made available online. Local coordinators hope that the visit of the “Museum on Wheels” will speed up the taking of the decision to build a lapidarium commemorating the Jewish community of Pleszew.

“Museum on Wheels” was a part of a festival called “Rusałka Niepamięci” [which approximately translates as “The Oblivion Fairy”; “Rusałka” is the name of a local lake]. Lake Rusałka is not a natural lake. Jews imprisoned in German forced labour camps contributed to its creation. “The lake is connected with a tragic history. It was dug by Jewish labourers and made available for use in 1943. Its function was to provide entertainment to rich Germans living in the Sołacz district”, explains Marcin Mikołajczak from Foundation Familijny Poznań.

“Everyone found the exhibition immensely interesting, especially the youth who were often not familiar with that part of our history. As far as the elderly are concerned, they kept to themselves on the first day and mostly observed what was happening but, later on, there were entire families taking part together”, said Aneta Kulińska from POLIN Museum of Polish Jews History who participated in the project as an educator. The “Museum on Wheels” was complemented with a great musical happening of Mikołaj Trzaska.

Thanks to the involvement of our local coordinator and thanks to financial support from the “Museum on Wheels”, two plaques were erected by the Jewish cemetery in Mirosławiec to commemorate the Jewish community and the most important spots related to it. As part of local activity, the local scout troop cleaned up the Jewish cemetery, removing bottles and rubbish from it.

Monika Romanowska-Pietrzak initiated cooperation with teachers from local schools which resulted in over 1700 children and young people visiting the “Museum on Wheels” when it came to Szamotuły. After we left the city, an article entitled “Museum on Wheels changed Szamotuły” and the local authorities undertook to erect a memorial plaque to mark the sport where a synagogue used to be.

More than one hundred viewers attended the screening of a movie entitled “Koźminek – historia nieznana. Żydzi” [The Secret History of Koźminek: Jews] shot by Donata and Andrzej Paruszewski. May all cinemas have such great audience as we had. The movie is about the life of Jewish community in Koźminek. While preparing the movie, its creators managed to contact Jews who have survived the ghetto of Koźminek.

The film premiered when the “Museum on Wheels” was in town and its premiere was one of the projects accompanying the exhibition.

To Stowarzyszenie Krotochwile, our local partner, the visit of the “Museum on Wheels” was a continuation of activity aimed at commemorating the Jewish community of Krotoszyn. Paweł Bajerlein found information which we placed on our interactive map of the city during his research in Poznań archives and it was not known to the people of Krotoszyn before.

Kępno is one of the three cities which proposed the greatest number of local activities in its application, aimed at energising the local community. Thanks to our coordinator, everyone, regardless of their age, was able to find something interesting for themselves in the programme. We hope that our visit will encourage the local community to start repairing the beautiful synagogue in Kępno.

People involved in organising the visit of the “Museum on Wheels” emphasized that the exhibition would increase awareness of local Jewish heritage and make more people visit the nearby Jewish cemeteries such as the one in Miejsce. It was also proposed that inscriptions from matzevas on local Jewish cemeteries be catalogued and translated.

Museum on Wheels became a part of SIMCHA ,the 17th Festival of Jewish Culture.

As part of local activity accompanying the visit of the “Museum on Wheels”, a presentation for students of the University of Third Age entitled “Koledzy ze szkoły, znajomi z sąsiedztwa” [“Schoolmates and friends from the neighbourhood”] took place. The elderly were eager to share what they remembered, added their own stories to what was being read, and talked with the organisers about Jews who used to live in Ziębice. The coordinators were happy that pupils from local schools had a chance to see the “Museum on Wheels”. Some secondary school students, having visited the museum’s pavilion, said they would be interested in organising a joint project about the Jewish cemetery.

Żarki is a city making very good use of its Jewish history and promoting it. On the website of the city hall, there is a tab about the Jewish community and monuments. The city also sports a renovated synagogue which became a source of inspiration for artistic workshops for children organised during the visit of the “Museum on Wheels”.

On the occasion of the visit of the “Museum on Wheels”, a festival of Jewish culture, including traditional music, dancing performances, and Jewish cuisine, was organised at the market square of the city. More than five hundred people from Czeladź and the nearby settlements attended the festival.

Beata Kuc conducts and records interviews with those people of Łazy who still remember the city and its inhabitants from before the war. Accounts connected with Jews form a significant part of such stories. Some such recordings were presented during the visit of the “Museum on Wheels”. Starting from the new school year, they will also be played in local schools. What is more, meetings of pupils with eyewitnesses of history will be organised.

Our local coordinator in Pińczów, a graduate of Jewish studies, has prepared and conducted, among other projects, a great walk following in the footsteps of the local Jewish community. Its participants were able to enter the synagogue and examine the decorations on its walls whose reproductions can be seen as part of a permanent exhibition in Polin Museum, in the Paradisus Iudaeorum gallery.

The “Museum on Wheels” became a part of the commemoration of the 69th anniversary of the Kielce pogrom.

Among other attractions organised in Wodzisław Śląski, there were culinary workshops, enabling the participants to learn how to prepare Middle Eastern dishes, including hummus and falafel. They also had a chance to talk and plan further cooperation while tasting the food they prepared.

Our local coordinators from Kłodzko emphasized local history and the fate of Jews connected with the city. This idea was perhaps best presented by means of an exhibition regarding Idzia Fink, a writer, and by means of involving Ignacy Einhorn, a local doctor and the former president of the Jewish religious community in Wrocław, in local activities.

During the three days for which the exhibition stayed in Kamienna Góra, as many as six walks following in the footsteps of the local Jewish entrepreneurs were organised. Those entrepreneurs, Rinkel, Grunfeld and Hamburgeraba by name, owned prosperous weaving plants before WWII, employing thousands of people and exporting goods to various placed all over Europe.

The most prominent point of the exhibition’s visit to Żary was a conference about the local Jews and Jews who used to live in the area of today’s Lubuskie Voivodeship. There is still a social and cultural Jewish association active in Żary [Towarzystwo Społeczno-Kulturalne Żydów].

The Museum on Wheels visited the Woodstock Festival as part of the Finest Arts Academy [Akademia Sztuk Przepięknych]. Several thousands of people saw our exhibition. We are glad that many of them have heard about us and have had a chance to come across our project in their own city or in its vicinity.